Penn State-Ohio State football game to kick off in prime time, will be televised by ABC

Penn State and Ohio State are set to square off in prime time. The Lions and Buckeyes will kick off at 7:30 p.m. Saturday, Sept. 29, on ABC.

Penn State-Ohio State football game to kick off in prime time, will be televised by ABC 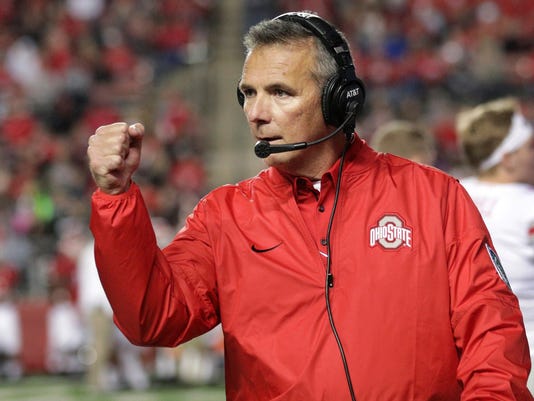 Urban Meyer will be back on the sidelines leading the Ohio State football team when the Buckeyes face the Penn State Nittany Lions on Saturday, Sept. 29. AP FILE PHOTO.(Photo: Mel Evans, AP)

As expected, Penn State and Ohio State are set to square off in prime time.

The No. 10 Nittany Lions and No. 4 Buckeyes will kick off at 7:30 p.m. and feature as ABC’s “Saturday Night Football” game on Saturday, Sept. 29. Penn State and Ohio State — who meet in primetime for the fourth time in the last five years — will play in front of White Out crowd at Beaver Stadium.

The last two meetings between Penn State and Ohio State have been decided by four points. Marcus Allen and Grant Haley’s blocked field goal touchdown defeated the Buckeyes in 2016 — a launching point back to national relevance and toward a Big Ten title for the Nittany Lions. Last year — in what was being billed as the game of the year — J.T. Barrett and Ohio State stormed back in the fourth quarter to dent Penn State’s playoff hopes with a 39-38 win.

Barrett is no longer the man in Columbus. Instead, Ohio State is led by sophomore quarterback Dwayne Haskins — a budding Heisman Trophy contender. The precise signal-caller has thrown for 890 yards, 11 touchdowns and just one interception while completing 72.5 percent of his passes through three games.

Of course, Haskins and his teammates were without Ohio State head coach Urban Meyer on the sideline for those three games. Meyer, suspended for his involvement in the Zach Smith domestic abuse saga, missed the Buckeyes’ tilts against Oregon State, Rutgers and TCU. In those contests — with Ryan Day serving as interim head coach — Ohio State outscored its opponents 169-62.

Meyer will coach the Buckeyes on Sept. 29. His first game back on the sidelines is Saturday, when Ohio State hosts Tulane.

Meanwhile, James Franklin, Trace McSorley and the Nittany Lions travel to Illinois, a program that has lost 18 of 22 games against Big Ten opponents in the last three years. The Nittany Lions and Illini kick at 9 p.m. Friday and will be featured on Fox Sports 1.

Both teams should win handily, setting up an undefeated, top-10 matchup in Happy Valley on Sept. 29.