Micah Parson made his long-awaited debut for the Penn State football team on Saturday during the Blue-White Game.

Micah Parsons’ mouth hung open as he sucked down a few deep breaths before heading over to Beaver Stadium’s south tunnel.

With his right leg covered in grass stains and his stat line reading eight tackles — twice as many as the next-nearest defender on the Blue team — the freshman linebacker seemed ready to call it a day.

“Right now, his fundamentals and techniques will slip when he gets tired,” defensive coordinator Brent Pry acknowledged after Saturday’s Blue-White Game. “But when you put him in a competitive situation when he’s tired, he rises to the occasion and comes out on top. So he’s just one of those guys. He’s got it within him to do whatever’s needed, you can usually get it from him.”

Saturday’s Blue-White Game was just a scrimmage, but it was also the debut of an impressive Parsons — the highest-ranked Penn State recruit since Derrick Williams in 2005. He’s the kind of player with the potential to eventually take over a defense, and Saturday provided fans’ first glimpse of the difference-maker in a blue-and-white uniform.

Parsons rang the victory bell once, then doubled back and rang it again, before slowly walking under the tunnel. He threw his white Nike gloves up to the screaming crowd and then, inside the bowels of Beaver Stadium, unwrapped the tape around his hands and tossed it to a few swarming fans.

“He’s just a freak athlete,” defensive tackle Kevin Givens said. “He dominates at his position, basically. He makes it look easy so, yeah, that’s what he’s been doing this spring.”

Added running back Johnathan Thomas: “He’s a guy who has a lot of potential. He is an athletic freak.” 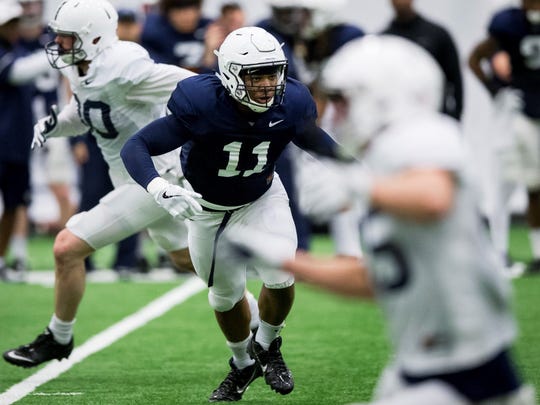 In three separate interviews with three separate players, Parsons was described the same way every time: an athletic freak. The former defensive end is understandably raw at this stage of his college career — he’s been on campus for four months and was a defensive end before that — but his ceiling is as high as any defensive player that’s come through Happy Valley in at least the last decade.

Parsons tended to step up when his team needed him most. When the opposing White team faced a third-and-10 situation in the second quarter, Parsons recorded a sack after forcing the quarterback out of bounds for a one-yard loss. On third-and-3 in the third quarter, he stopped Journey Brown a yard short of the first down. In the fourth quarter, he made a mental mistake and was called for a facemask but, had it not been for the penalty, he would’ve again stopped the receiver a yard short of the first down.

Not perfect: He wasn’t perfect. He showed hesitation, sometimes running back and forth after not diagnosing a play immediately. But the potential, the athleticism, was evident as he could normally be found around the ball.

“He’s very raw, but he’s a freak,” cornerback Zech McPhearson said. “He’s very, very athletic. He does some things that you wouldn’t expect a 17-year-old to do. It’s crazy.”

Fans won’t see the 6-foot-3, 241-pound Pennsylvania product on the field for another 133 days. He’ll be sharper then, more familiar with the position — and an even bigger force.

He impressed Saturday. But coaches and teammates didn’t rave about that performance. It’s about what he showed he was capable of in the future that has them excited.

“He’s 240-something and he runs a 4.5,” Thomas said. “You got to have some talent to do that. Once he learns the scheme and things, I feel like he’ll be able to contribute right away.”

Added Pry: “He’s extremely competitive. He wants to be great. He has the drive to reach his potential — and then some.”