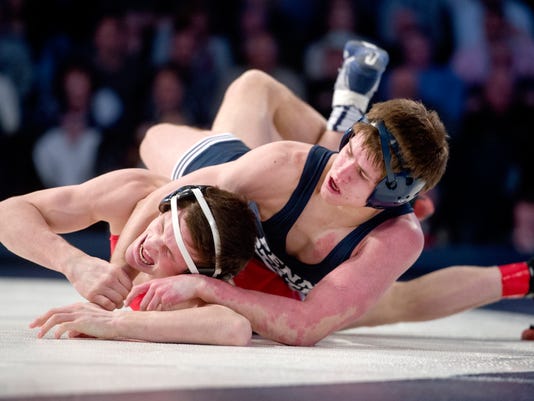 The Nittany Lions were led by senior Morgan McIntosh, sophomore Zain Retherford and red-shirt freshman Bo Nickal, with each earning Big Ten titles as Penn State out-ran second-place Iowa by more than 20 points. Penn State won the team race with 150.5 points, well ahead of Iowa's 127.0. Ohio State was third with 122.0, Nebraska fourth with 117.0 and Rutgers fifth with 106.5.

Retherford, ranked No. 1 at 149, took on No. 2 Brandon Sorensen of Iowa in the 2016 Big Ten finals. The Nittany Lion continued his impressive season with a resounding 4-0 win to claim his first Big Ten title.

Nickal, ranked No. 1 at 174, took on No. 3 Zach Brunson of Illinois. Nickal became the 23rd person to win Penn State's 37th Big Ten Championship with a lop-sided 18-9 major over Brunson.

McIntosh, the defending Big Ten Champion and ranked No. 1 at 197, met No. 4 Nathan Burak of Iowa in Penn State's final championship match. The Lion senior defended his Big Ten title with a 3-2 win.

Senior Nico Megaludis, ranked No. 4 nationally at 125, fell to Ohio State's Nathan Tomasello, ranked No. 1, in the championship finals. Tomasello notched a takedown in extra time to post a 3-1 (SV) victory.

Red-shirt freshman Jason Nolf, ranked No. 1 at 157, met No. 2 Isaiah Martinez of Illinois in the title bout. In a rematch of January's meeting where Nolf pinned Martinez, handing him his first loss as a collegian, Nolf dropped a 3-3 (criteria) loss. The setback was the first of Nolf's career.

Junior Jimmy Gulibon, ranked No. 21 at 141, took on No. 5 Anthony Ashnault of Rutgers in the title bout. Gulibon suffered a 9-0 loss.

Senior Jordan Conaway, a New Oxford High School graduate who is ranked No. 5 nationally and was the tournament's third seed at 133, took fourth place with a 1-1 showing in consolation action.

After receiving the team trophy, Penn State then collected all three of the conference's post-season awards. Sanderson was named Big Ten Coach of the Year for the fifth time in his seven years as Penn State's head coach. Retherford was honored as the 2016 Big Ten Wrestler of the Year, becoming the seventh Nittany Lion to be honored as such. Nolf was named the Big Ten Freshman of the Year, becoming the first Nittany Lion to win the award since David Taylor in 2011 and the fifth overall.