How does the Big Ten play football without open campuses?

Not one of the 14 schools in the Big Ten Conference can say for sure it will have students back on campus this fall.

How does the Big Ten play football without open campuses? 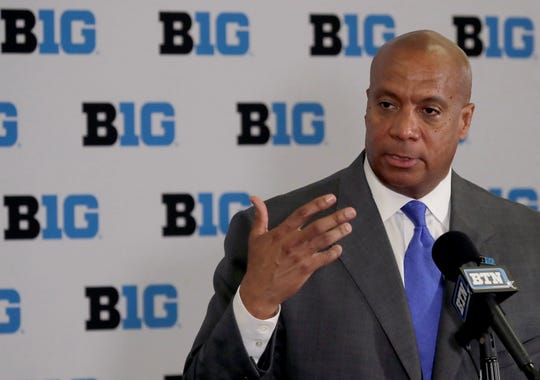 Less than four months before the scheduled kickoff of the college football season, not one of the 14 schools in the Big Ten Conference can say for sure it will have students back on campus this fall – a crucial step for sports.

Uncertainty about how the coronavirus pandemic will unfold through the summer has kept universities from making a definitive decision about the fall semester, which typically begins in late August. The football season, for now, is due to begin Aug. 29, though Big Ten schools don’t begin play until the following week.

Decision at least six weeks away: Big Ten Commissioner Kevin Warren told the Chicago Tribune the conference is at least six weeks away from making any determinations about the fall sports season. Organized team activities are on hold until at least June 1 and the situation will be re-evaluated then. Warren’s office didn’t respond to a message seeking further comment.

Big Ten schools, like others, have begun planning for reopening campuses, possibly with social distancing guidelines, masks and other precautions left in place. But none can say definitively that it will happen on time this fall.

Purdue is most resolute: The most resolute about having students back has been Purdue President Mitch Daniels. The former Republican governor of Indiana said students will be back on campus “in typical numbers” this fall, adding that Purdue will remain “sober about the certain problems that the COVID-19 virus represents, but determined not to surrender helplessly to those difficulties but to tackle and manage them aggressively and creatively.”

Daniels suggested that could involve reducing the size of classes, more online instruction and keeping older, more vulnerable people away from the student population.

Iowa higher education officials say they are planning to have the state’s three campuses open in the fall, but there are no solid plans yet. There was a similar announcement at Nebraska.

Indiana President Michael A. McRobbie wrote in a email to the university community last week that it “would not be realistic or even responsible to promise a full resumption of in-person activity in the fall” while the potential still exists for a recurrence of the virus.

Or as David Weismantel, who co-chairs the campus reopening task force at Michigan State, put it: “We are on the virus’ timeline.”

Maryland, Rutgers, Michigan, Minnesota and Northwestern are in various stages of planning.

Cautious optimism: The NCAA’s top doctor said he is cautiously optimistic that there will be college sports in the fall as long as leaders take a methodical approach. Dr. Brian Hainline told The AP last week that it would have to involve widespread testing for coronavirus.

Regarding football and other fall sports, one early proposal included playing games in stadiums without fans to at least secure the TV revenue, but the idea has been met with some derision.

“Think about that, if students aren’t on campus that means the institution has made a decision it’s not safe for those students to be here on campus,” Ohio State athletic director Gene Smith said. “Why would it be safe for student-athletes? I keep hearing and it’s like, ‘How does that work? It doesn’t make sense.’”