In a loss, the Michigan basketball team learned just how much it needs Spring Grove High School graduate Eli Brooks. 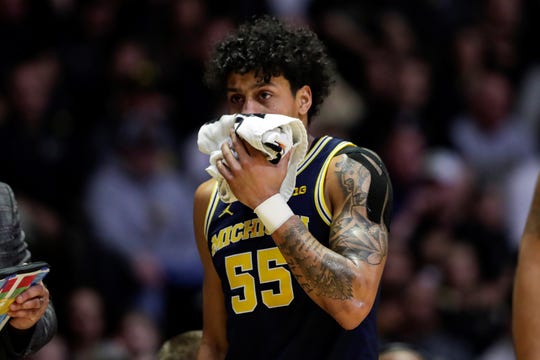 But on Thursday night, the Wolverines learned how bad it can get without Spring Grove High School graduate Eli Brooks.

U-M's other starting guard sat out the 81-74 loss at home to Wisconsin with a broken nose suffered  Feb. 22 at Purdue. His  absence was noticeable.

"That guy is an Army Swiss knife," coach Juwan Howard said. "Today we missed him not only on the defensive end but also offensively, being able to just keep our offense running at a nice, smooth pace.”

The Badgers averaged 1.23 points per possession in what was U-M's second-worst defensive performance of the season. It was a dispiriting loss that left Howard unhappy with a lack of defense and the players unhappy with their effort and energy.

Brooks, who averages 11.0 points, 3.7 rebounds and 2.0 assists, is a key contributor on offense. He can handle the ball, but most importantly, he operates as a key secondary cog in Michigan's attack. He has made a team-high 49 3-pointers  and helps spread the floor.

He might be the team's best defender, too. The junior has often drawn the opposing team's toughest backcourt assignment; he was responsible for guarding Michigan State's Cassius Winston in the teams' second meeting this season,  helping limit Winston to 5-for-18 shooting.

Against Wisconsin, he likely would've guarded D'Mitrik Trice, who ended up scoring 28 points on 10 of 16 shooting, and he made 5 of 6 3s.

"With his presence, we saw how we missed his activity. We missed his energy, being able to guard guys, attention to detail when it comes to the scouting report."

The prevailing thought before the game was that if Brooks couldn't play, backup guard David DeJulius would start. It was DeJulius who replaced Brooks for the second half at Purdue after Brooks was injured. Instead, Howard elected to go big, inserting Brandon Johns Jr. in the starting lineup.

His rationale: He didn't want to risk foul trouble for both of his primary ballhandlers.

"Both (Simpson and DeJulius) get one quick foul, then we’re in trouble," he said. "So I tried to do my best to balance out their minutes and stagger them in some type of way, so that if anyone got in foul trouble, I could always have one of our guys be able to quarterback the team and lead us and get us organized offensively.”

The big lineup gave Michigan a notable size advantage over the Badgers, who start three guards, but it also gave Wisconsin a speed advantage. Michigan's big lineup struggled to stay in front of the Badgers' smaller, quicker players.

"I mean, obviously it’s a new lineup, but a lot of big bodies out there," Wagner said. "We should take advantage of that on both ends of the floor. We didn’t do that — wanted to switch a lot. Look at the film, we didn’t talk. Nobody knows who to guard."

Later, the Wolverines found some success by moving Johns to center in place of Jon Teske, while using DeJulius and Simpson together in the backcourt. With that lineup, Michigan switched every screen and found it was more capable of doing so. But while it narrowed the gap to as little as three with the lineup, it was too little, too late.

Brooks, who sported a bandage over his swollen nose, may be able to play Sunday at Ohio State although that's yet to be determined. If he does, he'll likely have to wear a protective mask.

Beating the Buckeyes in Columbus already seems like a tall task. Playing without Brooks would only compound that difficulty.