Dover High School graduate Brooke Firestone has been named the D3Soccer.com Women's Forward of the Year. 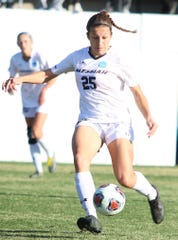 The honors continue to pile up for Dover High School graduate Brooke Firestone.

Firestone was a first-team Middle Atlantic Conference Commonwealth selection for a third time and repeated as the conference’s Offensive Player of the Year. Her 19 goals, 44 points and eight game-winning goals were all team highs, as well as the top marks in the conference. 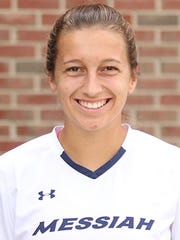 In the national semifinals, she converted the deciding penalty kick in a shootout win against Carnegie Mellon.

Firestone leaves Messiah with 51 goals and 29 assists over her college career.

Her coach, Scott Frey, was named the D3soccer.com Women’s Coach of the Year.

He led the Falcons (22-1-3) to a record-breaking sixth D-III national title. It's the second time Frey has earned the honor.

Frey’s career winning percentage of .919 is tops across all NCAA divisions of men’s and women’s soccer. He collected his 400th career victory on opening day and sits fifth among active D-III women’s coaches with 421 wins.