The surging Millersville University women's volleyball team is fueled by a pipeline of talent flowing from the York-Adams League. 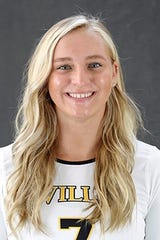 The success of the 2019 Millersville University women’s volleyball program has been largely fueled by a pipeline flowing with talent from the York-Adams League.

This past week, one of those former York-Adams standouts reached a career milestone and also was honored by the Pennsylvania State Athletic Conference.

Blevins helped the Marauders finish the regular season with eight consecutive victories, including three in-division wins in the final week. During that week, against rivals West Chester, Shippensburg and Shepherd, Blevins averaged 15.3 kills and 12.0 digs.

The week started with a sweep of West Chester, when Blevins recorded a double-double of 12 kills and 10 digs. Blevins played a key role in Millersville scoring a 3-2 win over division-leading Shippensburg and in a sweep of Shepherd, which secured the Marauders' first home PSAC playoff match in 20 years.

The 5-foot, 10-inch, junior outside hitter recorded a double-double of 17 kills and 20 digs against Shippensburg. She was especially key late in the match, recording 13 of her 17 kills in the final two sets. She had five of the Marauders' nine kills in the fifth set and did not commit an error. In the three-set sweep of Shepherd, she posted a match-high 17 kills and also added two service aces.

During the match against Shippensburg, Blevins tallied the 1,000th kill of her career.

Millersville (25-7 overall and 15-4 in the PSAC) closed the regular season with a program-record 25 victories and hosts a PSAC Tournament match against Shepherd at 7 Tuesday night.

Other York-Adams contributors: Blevins, however, is not the only York-Adams woman thriving for the Marauders.

Delone Catholic grad Katie Laughman, a 5-7 senior setter, directs the Millersville offense and leads the team in assists (1,162) and is second in digs (339).

York Catholic grad Emily Hoffman, a 5-7 sophomore setter/defensive specialist, is fourth on the team in digs (283).

South Western grad Erin Harman is an assistant coach on the team.