Penn has canceled the rest of the women’s volleyball season after the discovery of “vulgar, offensive” signs in the team’s locker room.

PHILADELPHIA – Penn’s athletic department has canceled the remainder of the women’s volleyball team’s season after announcing the discovery of “vulgar, offensive and disrespectful” signs in the team’s locker room.

The announcement, made Wednesday evening, said the signs were found “earlier this week.” It gave no details about what was on the signs or how they were displayed.

Calhoun added that the incident has been reviewed “with the appropriate University partners,” and any additional actions will be determined “in the coming days and weeks.”

The team’s remaining games were to be road contests Friday against Yale and Saturday against Brown. 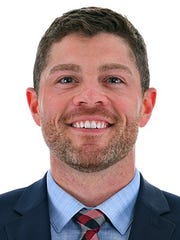 Penn’s volleyball program has been in tumult for a year and a half, dating back to the hiring of current coach Iain Braddak in April of 2018. Since then, eight players have filed formal grievances with the athletic department over his conduct.

In May, the Daily Pennsylvanian reported that three of the grievances were “Braddak telling an assistant coach to hit a player in the face with the ball in practice, Braddak accusing the team of bullying over a misplaced jacket, and the coach telling a player that their lack of playing time could be worse; they could become addicted to heroin or commit suicide.”

Penn recently moved to strengthen oversight of its universitywide mental health efforts. On Tuesday, it announced that the campus’ counseling and psychological services program was moved under the umbrella of the provost’s office, along with oversight of other health and wellness programs.