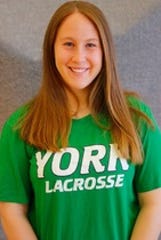 The Spartans fell to the Tufts Jumbos, 11-6, in a quarterfinal contest.

No. 6 York saw its season end at 17-6, while No. 4 Tufts improved to 19-2 with the home victory. The rankings are according to the Intercollegiate Women's Lacrosse Coaches Association poll.

It was the first-ever meeting between the two programs.

The Capital Athletic Conference Tournament champion Spartans have never advanced to an NCAA Final Four. They have made the Elite Eight on four different occasions, including the last three straight.

York did take an early 2-1 lead vs. Tufts, but the Jumbos scored three straight goals to grab a 4-2 edge that they would never relinquish. Tufts led 7-4 at halftime and pushed its advantage to as large as 11-4 before York scored the game's final two goals to account for the final tally.

York had advanced to the NCAA D-III Elite Eight with a 14-11 win victory on Saturday over No. 11 St. John Fisher in a game also played in Medford.

Coppersmith finished her freshman season at UMBC at 21-14 with a 1.97 ERA. She had five no-hitters and struck out 346 in 238 1/3 innings. She was the first player in America East history to be named the conference Pitcher of the Year and Rookie of the Year in the same season.

As a result, Hoffman is headed back to the NCAA Division II Outdoor Track and Field Championships after earning second-team All-America honors as a freshman, when he finished 10th.

This season, Hoffman has twice set the Pennsylvania State Athletic Conference record. He established new program and PSAC records with a career-best throw of 186-feet, 4-inches (56.80 meters) to win the event at the PSAC Outdoor Championships. His throw was good for fourth in all of NCAA Division II this season.

Hoffman's PSAC title was Kutztown's first in the discus since Erik Miller in 2000.