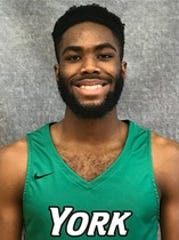 The York College men's basketball team appears to be peaking at the perfect time.

The Spartans cruised to their ninth-straight victory and into the Capital Athletic Conference semifinals on Tuesday night.

It was one of York's top defensive efforts of the season. The Spartans limited St. Mary's to 32 percent shooting from the field. The 47 points allowed was a season-best for the Spartans.

Senior standout Jason Bady powered York with 25 points, seven rebounds, a career-high six steals and three assists. He was 9 for 16 from the field. Bady now has 1,064 career points and he moved up to 23rd on the all-time school scoring list.

Joey Polczynski and Zach Novick each added 14 points for the Spartans.

The CAC title game is set for Saturday at the best remaining seed. The other CAC semifinal on Thursday pits at No. 4 seed Salisbury at No. 1 seed Christopher Newport. CNU and York shared the regular-season conference title.

PSY, the No. 2 seed in the Eastern Division, improved to 18-8. No. 3 seed Brandywine finished 14-12. It was PSY's third win over Brandywine this season.

McGowan was named to the Capital Athletic Conference Women's Basketball First Team on Wednesday. For the season, she averaged 18.2 points and 6.8 rebounds per game.

York sophomore Kayla Ferris was picked for the CAC second team. She averaged 10.1 points, 6.8 rebounds and 3.2 assists per game.

York 16, Washington 9: At York, the Spartans opened the 2019 season with an easy nonconference win.

York was ranked No. 6 in the nation in NCAA Division III in the preseason.