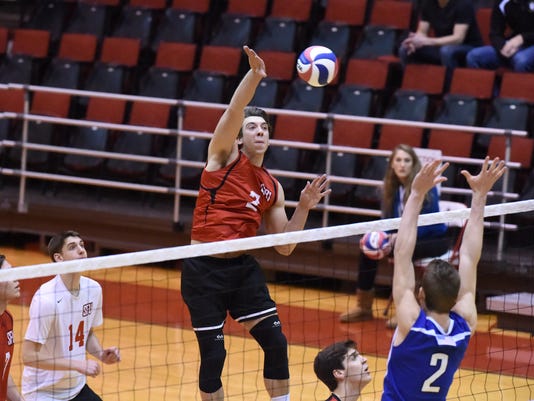 If it hadn’t been for circumstances beyond his control, former Northeastern High School boys’ volleyball standout Stephen Braswell may not have ended up playing at the NCAA Division I level.

Originally committed to Marymount University in Virginia, the coach that recruited Braswell there left the program. That caused Braswell to reconsider his suddenly wide-open options, which led him to St. Francis University, a D-I school located just west of Altoona in Loretto.

While those numbers are certainly outstanding, perhaps more important is that Braswell is putting them up in the biggest games of the season. He pounded out a season-best 20 kills in a 3-1 victory over No. 6 ranked Penn State two weeks ago. He also had 19 kills in a victory over No. 17 Ball State and 10 more in a triumph against No. 12 Loyola.

We caught up with Braswell recently for this edition of Sports Q&A.

How did you end up at St. Francis?

A: “During my senior year at Northeastern I was originally going to go to Marymount in Virginia. But I didn’t go there because the coach had left at the time and it just didn’t seem like the right fit for me. Then (St. Francis coach) Mike Rumbaugh called me up and said he had a spot for me here and I’m grateful for that.”

How well did playing in high school at Northeastern prepare you for playing at the highest level of collegiate volleyball at St. Francis?

A: “I think that Northeastern prepared me very well for playing here. (Northeastern head coach) Matt Wilson runs a very intense practice and that’s definitely helped me with the intensity level of college practices. Just the mentality of going for every ball and to keep going no matter what. And to never take a play off, which applies so much at the collegiate level. If you take one play off in college, the other team gets that point. In high school that may not happen as much, but that mentality at Northeastern definitely set the standard for me coming into college.”

When did you start to get regular playing time at St. Francis?

What’s the biggest difference that you had trouble dealing with at the college level?

A: “Size. In college most guys are 6-foot-5 and above. So the height of the players and getting used to playing against those guys all the time. At 6-2, I’m the shortest one on the court on my team. Often times I’m the shortest guy playing except maybe the other team’s libero. But the libero on my team is 6-4. So, for me, as an attacker I have to get used to playing against bigger guys.”

You’re leading your team in kills and aces and second in digs this season. That’s almost exactly the same thing you did in high school at Northeastern, right?

A: “Yes. Playing at Northeastern definitely instilled a passion for the game and made me want to get better, and fortunately I’ve been able to translate that into the college game here at St. Francis.”

How big are those games against Penn State?

A: “Well, before this year we had never beaten them. So it’s not much of a rivalry, but it is the one that everyone gets pumped up for the most. I’m hoping that we’re going to make beating them a bit more regular. But getting that first win was big.”

Was beating Penn State a little more sweeter because your brother, Luke, is playing there now?

What was it like for your brother during that game?

A: “It was definitely a bittersweet thing for him. I know he doesn’t want me to do poorly, but at the same time his team lost. And I’m the same way.”

What are your parents going to do next year when both you and Luke are playing against one another? Who will they root for?

Penn State has former Central York standout Royce Clemens playing there as the libero. With you, your brother, Royce and then a couple more kids like (Northeastern’s) Reese Devilbiss and (Central York’s) Hayden Wagner going to play at Division I schools next year, that says a lot about York-area volleyball, right?

A: “It does. It really does. From Northeastern and Central over the past three years, they’ve sent out some really big players to big places. It’s pretty impressive what our small county does.”

I saw that you won a pair of prestigious awards personally for your play against Penn State. How did that make you feel?

A: “I got our conference offensive player of the week, which is the EIVA, and I got the AVCA, which is the American Volleyball Coaches Association player of the week award and that was pretty big. We’ve only ever had a few people at St. Francis get that AVCA award. Last year my teammate Michael Marshman got that award after having a really big weekend. And that was the first time that we had won that in like five or six years here at this school. So it’s great to get St. Francis some recognition for having some really talented players and we do have a lot of good players here this year.”

What’s the best advice you received about playing volleyball at the college level?

A: “Initially when I was going to go to college, I went from going to play at a Division III school (Marymount) to a Division I school. And Coach Wilson told me that playing at Division I to hit the ball high. Coming into my redshirt year I didn’t exactly know what he meant by that. When I got here I realized that everybody was 6-6 or 6-7 and I was like, ‘oh, I have to hit the ball a lot higher than I am.’ Hitting high is one thing that I didn’t have coming into college and I had to learn how to do it.”