Andy Etchebarren was in these parts for only a short time, but in many ways, the ex-York Revolution manager was a perfect reflection of York County. 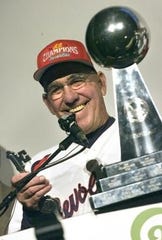 Manager Andy Etchebarren led the York Revolution to Atlantic League championships in 2010 and 2011. (Photo: PHOTO COURTESY OF THE YORK REVOLUTION)

Andy Etchebarren was a York County kind of guy.

Just ask those who knew him and worked with him over the years.

The same descriptions come up time and time again.

“Etch,” as he was known, was equal parts profane and passionate, gruff and generous, competitive and caring.

Mostly, however, the former Baltimore Orioles catcher was always true to himself. He was a bigger-than-life personality — an old-school baseball man who learned his craft from former O’s manager Earl Weaver. Like Weaver, Etchebarren was never a great player, but he was always a great showman.

And according to those who interacted with him, Etch was also a great guy.

He only spent a few years in York County but still left an indelible mark on our sports community.

That’s why so many in York County are mourning right now. The former York Revolution manager died  Saturday at age 76.

Arriving in York: Etch arrived in York in 2009, taking over a Revs team that was struggling mightily in just its third year of existence. He immediately began making some player moves that meant certain fan favorites were sent packing.

Some of the team’s fervent followers weren’t happy, and they let Etch know it.

“It was almost like he was under a microscope from some of the diehard fans,” longtime Revs play-by-play radio broadcaster Darrell Henry remembers. “But by midseason (of 2010) when that team took off and won the division, his popularity was skyrocketing, and it wasn’t just the wins and losses, it was his genuine interactions with the fans and them getting to know him and what kind of man he truly was.

"He was always willing to make the tough decision to better the team.”

There’s no doubt that Etch did make the team better. The Revs won the franchise's first two Atlantic League titles in 2010 and 2011 and made the playoffs in 2012 before Etch decided to retire as York’s manager, saying simply, “it’s time.” 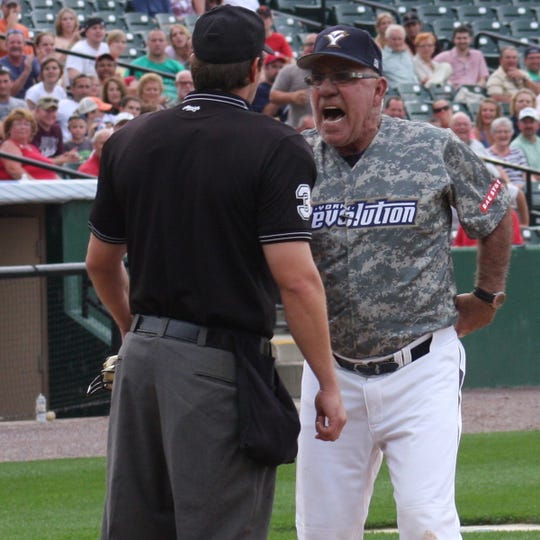 A favorite of fans, but not umps: In that short time, Etch became a beloved figure for many in York County. His No. 8 would, justly, be retired by the Revs.

The local fans loved the way he fought for his team, often by berating the umpires in loud and colorful language. Of course, his legendary umpire bashing sometimes led to Etch getting a call from league officials the next day, but that did little to change his behavior.

Etch would continue to be Etch.

Etch was also a favorite of the reporters who covered him because he almost never engaged in typical “coach-speak.” He simply told it like it was.

“Like a lot of my favorite (Etch) memories, many of them can’t be shared here because they’re not family-friendly,” former York Dispatch reporter John Walk said. “But let’s just say the one that has stuck with me the most over the years has to do with a rainy baseball game, the balls getting wet and Etch not being happy about it, leading to a colorful conversation with the home-plate umpire that included some expletives, a conversation he openly shared with reporters after the game. I don’t think I’ve ever laughed harder during a postgame interview.”

A showman: One of Etch’s favorite moves came after he was ejected, when he would take the first-base bag with him back to the clubhouse.

“What folks might not know is that was the only first-base bag in the building.” Walk said. “So the team’s field operations guy would have to go track it down. Turns out, after exiting the field, Etch tossed the first-base bag back into the equipment area behind the right-field wall.”

Another one of Etch’s favorite post-ejection performances, according to Walk, involved him getting down on his hands and knees to cover home plate with dirt to express his displeasure with the ump’s strike zone.

Etch, it seems, understood that independent minor league baseball isn’t just about the game. You also have to give the fans a show, and Etch enjoyed doing just that.

A love for the game: That doesn’t mean, however, that Etch was just a showman. He also passionately loved the game that became his career, both as a player and a manager.

“Etch was an old-school, tough, hard-nosed baseball guy who could come across gruff initially, but he had the biggest heart for his players, the fans, and really everyone to be honest,” Henry said. "For players, if you played hard, he had no problem with you. He came from the Earl Weaver school and seemed like a no-nonsense guy at first, but he really loved to have fun with the guys. He created a great atmosphere in the clubhouse. He’d chide guys, and they’d give it right back. His guys really respected him.”

He was here just a short time, but there’s no doubt he left a lasting legacy.

He’ll be remembered, and he’ll be missed.