The York Revolution cemented their second seven-game winning streak in the last three weeks and their seventh consecutive series win on Wednesday. 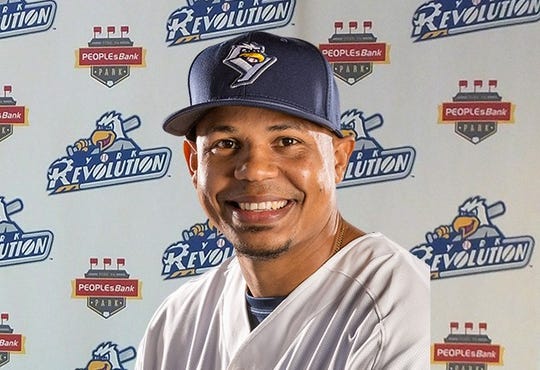 The win, coupled with another Sugar Land loss, brings the Revs within 1.5 games of first place with four remaining in the season’s first half, erasing what was a 13.0-game hole in the standings roughly three weeks earlier. The Revs will aim for a second straight series sweep in the Independence Day series finale on Thursday evening.

The Revs trailed early thanks to a two-out RBI single up the middle by Dean Green in the bottom of the first, plating Kent Blackstone who led off the game with a double.

The Crabs threatened with runners on second and third and no outs in the second inning after a one-out double by Josh McAdams, but Revs starter Duke von Schamann was nearly unhittable from there, striking out Blackstone and retiring Rubi Silva on a ground out to keep the score 1-0 before dominating the rest of the way.

Benches empty: After benches emptied following a hit by pitch of Welington Dotel in the top of the second, the fourth Revs hit batter in two nights to begin the series, the Revs rallied for two runs in the third, taking a 2-1 lead.  Alvaro Rondon sparked things with a leadoff single to left and Henry Castillo worked a one-out walk to put two men on.  Telvin Nash came through with an RBI single to left to tie the game on his league-leading 51st RBI.  After a walk to Isaias Tejeda, Ryan Dent smacked a line drive sac fly to center, allowing Castillo to trot home with the go-ahead run.

Tejeda added to the lead in the fifth, lining a screamer that just cleared the wall in left for his first home run of the season.  The solo shot was the 29th of his Revs career, giving York a 3-1 lead.

von Schamann (3-2) dominated the back half of his outing, striking out the side in the third which began a stretch on which he set down 11 of his final 13 batters.  The righty finished with back-to-back 1-2-3 innings, and held the Crabs to one run on seven hits over six innings, while walking one and striking out eight.

The Revs pushed across an important insurance run in the top of the seventh as Castillo led off with a bloop double to right and scored on Tejeda’s one-out single to right field, increasing the lead to 4-1.

Julio Perez notched the first two outs in the bottom of the seventh but ran into trouble with a pair of walks and a catcher’s interference that put Blackstone on base.  Pete Tago entered to retire Green on a fly out to left as Angelys Nina made a fantastic running grab near the foul line to leave the bases loaded.

Corey Vaughn led off the home eighth with a double down the third base line and scored on a single to left by Charlie Valerio, bringing the Crabs within 4-2.  Josh Judy entered to induce three consecutive ground outs, one of which plated Valerio, sending the Revs to the ninth with a 4-3 lead.

Jameson McGrane took care of business for a 1-2-3 save in the bottom of the ninth, retiring Joe Benson on a ground out to third to end it as Tejeda made a terrific pick on the throw at first base.

Notes: York has won 17 of its last 20 and is 19-4 since June 10, both the greatest 20-game and 23-game stretches in franchise history.  The Revs have strung together two seven-game winning streaks in the same season for the second time in franchise history (2011).  York has won eight of its last nine on the road including a pair of four-game road winning streaks; it’s the first time since 2015 that York has enjoyed two road winning streaks of at least four games in the same season.  The Revs will attempt to tie a franchise record with an eighth straight win and fifth consecutive road win, both for the fourth time, in Thursday’s game; York’s last eight-game winning streak occurred in 2011 and the last five-game road winning streak occurred in 2014.  Nash’s 51 RBI are one shy of matching the franchise’s first half record (52, Andy Marte, 2013).  von Schamann’s eight strike outs match a single-game high by a Revs pitcher this season (Troy Terzi, Dan Minor).  Dotel doubled in the top of the eighth, extending his hitting streak to 18 consecutive games; it is the league’s second-longest this season, behind only teammate J.P. Sportman whose 27-gamer ended when Sportman was forced to exit due to injury after a hit by pitch in Tuesday’s contest.  Dent singled in the fifth for an 11-game hitting streak.  Castillo’s eighth inning double gave him a 10-game streak.  Tago has stranded 14 of 16 inherited runners on the season after leaving the bases loaded in the seventh.  The Revs are within 1.5 games of first, and at 32-34 are within two games of .500, both for the first time since they were 4-6 on May 6.  York was in last place as recently as June 10.  York improves to 8-1 vs. Southern Maryland and is now 17-9 vs. the Freedom Division.  Revs righty Corey Walter (2-3, 4.79) faces Crabs right-hander Daryl Thompson (5-6, 3.89) on Thursday at 6:35 p.m.

Information for this story was provided by the York Revolution.