With their Atlantic League opener looming, the York Revolution added some pitching help this week.

With their 2019 Atlantic League regular-season opener looming, the York Revolution added some pitching help this week.

The Revs have added left-handed pitchers Francisco Gracesqui and Trevor Reckling to the 2019 preseason roster. The signings were announced on Tuesday by Revs manager Mark Mason when the Revs held their first spring workout. 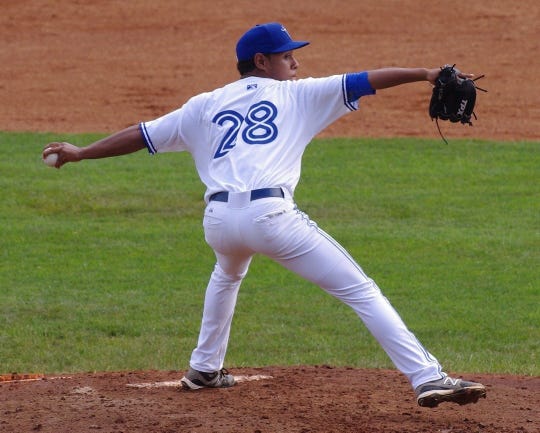 Francisco Gracesqui: Gracesqui follows in the footsteps of his older brother, Frank, who appeared in 11 games early in the 2010 season for the Revs.

The younger southpaw enters his sixth pro season and boasts a 13-6 career record with a 3.34 earned-run average in 112 lifetime appearances, all but one of which has come in relief.

Those numbers include a 10-4 mark with a 2.20 ERA in 62 outings as a member of the Toronto Blue Jays organization. The Bronx, New York, native originally signed with Toronto and advanced as high as Class A Lansing in 2014 and 2015.

The 27-year-old then saw time in the Can-Am and American Association and started a combined no-hitter in his lone career starting nod for Kansas City last season.

Gracesqui has struck out 10.3 batters per nine innings over the span of his career and was a Northwest League All-Star in 2014, when he held opponents without an earned run in 11 outings before his promotion to Lansing.

Trevor Reckling: Reckling joins the Revs for his ninth pro season. The 29-year-old turned pro after being drafted by the Los Angeles Angels in the eighth round of the 2007 draft out of St. Benedict’s Prep in Newark, New Jersey.

Reckling immediately dominated, going 3-1 with a 2.75 ERA and 13.8 strikeouts per nine innings with the Arizona League Angels during his first summer as a pro. He was a 10-game winner and a Midwest League All-Star for Cedar Rapids in his second pro season in 2008 and combined to win nine games and post a 2.68 ERA between High-A Rancho Cucamonga and Double-A Arkansas, which led the Angels organization in 2009. He was a Texas League All-Star, a Futures Game participant and MLB.com’s selection as Angels Organization Pitcher of the Year. He pitched for Team USA at the conclusion of that season while also ascending to fourth on the Angels prospect list by Baseball America. His steady climb saw him split the 2010 season between Arkansas and Triple-A Salt Lake, and garner Texas League All-Star accolades for the second time in 2011.

After six years in the Angels system, Reckling went 4-4 in 12 Atlantic League starts for Bridgeport in 2013. The Livingston, New Jersey, native has also pitched in the Chicago White Sox, Cincinnati Reds and Arizona Diamondbacks farm systems, toed the rubber twice for Rockland (Can-Am) in 2015, and pitched professionally in the Netherlands in 2017.

“Both have shown promise with what we’ve seen in their bullpen sessions, and we’re looking forward to seeing how it plays in our exhibition games during spring training,” Mason said in a news release.

The Revs now have 28 players under contract for the 2019 season, including 16 pitchers.

Fan Fest: The team's 2019 Fan Fest is set for Saturday at PeoplesBank Park in downtown York. Admission to the daylong celebration will be $5 per person, but free for full-season ticket holders and $3 for mini-plan ticket holders. Gates open at noon. Among the activities is a 2 p.m. exhibition game vs. Somerset. For a full schedule of Saturday's events, visit yorkrevolution.com.

Information for this story was supplied by the York Revolution.