A key member the York Revolution's 2017 Atlantic League championship team and a "strikeout machine" are the latest additions to the Revs' 2019 roster. 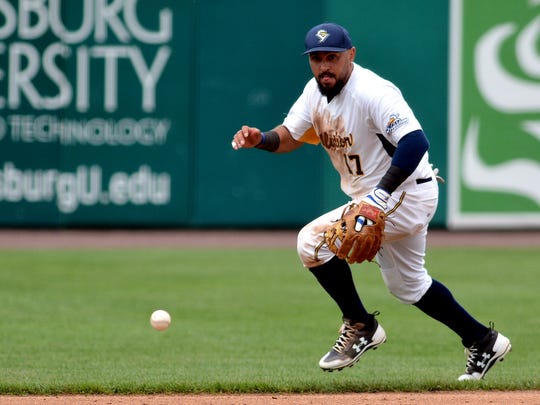 A key member the York Revolution's 2017 Atlantic League championship team and a "strikeout machine" are the latest additions to the Revs' 2019 roster.

Dent returns for his third season with the club as one of the Atlantic League’s better shortstops.

He was a key piece of the Revs' 2017 Atlantic League title squad during his first season in York, batting .266 with five home runs, 21 doubles, and 46 RBIs. He also handled the final defensive outs of the wins that clinched the team’s playoff berth, division series title and championship victory.

Dent holds franchise records for home runs and RBIs by a shortstop and has started 200 games at short in his York career, second most in franchise history.

“You can’t put a value on what he does,” Mason said in a news release. “When you see anything hit in his direction you just figure the batter’s out. He’s just a very solid defensive player that can actually play everywhere in that infield.

"The thing I love about him most is the last couple of years when we were dealing with injuries elsewhere, he would play every night even when he was banged up. He’d just continue to go out there and give you everything he had every night. To me, that’s why his offense last year was even more impressive.”

Dent spent his first eight pro seasons in the Boston Red Sox organization and two more with the Chicago Cubs, reaching the Triple-A level with both clubs. The 13-year pro was a first-round selection (62nd overall) of the Red Sox in the 2007 amateur draft and is a career .240 hitter with 58 home runs, 368 RBIs and 107 stolen bases.

The Long Beach, California, native was named the Red Sox Minor League Defensive Player of the Year in his third pro season in 2009. He will celebrate his 30th birthday on Friday.

Jameson McGrane will join the York Revolution's pitching staff for the 2019 season. (Photo: PHOTO COURTESY OF THE YORK REVOLUTION)

Jameson McGrane: McGrane comes to York for his first Atlantic League season after previously pitching in the Miami Marlins' farm system. A 26-year-old from nearby Potomac, Maryland, the 6-foot-4 right-hander began the 2018 season with Florence of the Frontier League, where he allowed two hits and no earned runs in 9 1/3 innings, while striking out 19 and posting a pair of saves.

That effort earned him a contract with the Marlins, where he spent time at four levels, combining to go 4-0 with four saves, a 2.30 ERA and 39 strikeouts, while allowing 19 hits in 27 1/3 innings

“He’s a strikeout machine," Mason said in the news release. "He can dominate with his fastball. He’s young, he’s hungry and wants a chance to get back to a major league club. I was surprised he was available, and to me it was a no-brainer to bring him in. We’ll give him a great opportunity to come in and perform.”

The Revs now have 17 players under contract for the 2019 season, with more signings set to be announced live during the next episode of “Revs Hot Stove Weekly presented by Shipley Energy,” at 6:30 p.m. Tuesday, March 19.

Information for this story was provided by the York Revolution.