Revs' players explain why they keep coming back to York

Each player had a different reason for why he wanted to return to York for the upcoming Atlantic League season. 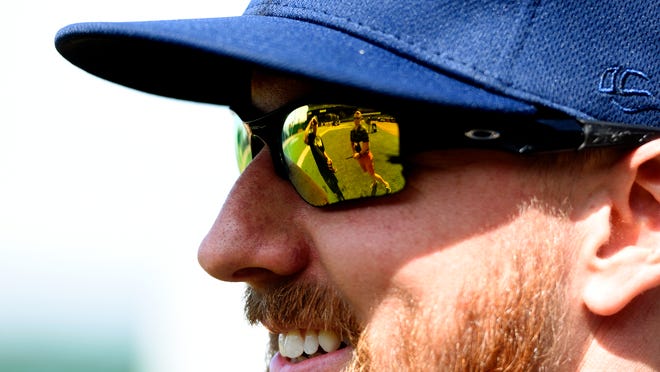 The underlying theme, however, was the same — once a player gets a taste of playing for the Revolution, the option of returning becomes a great fall-back position if they can't land somewhere bigger and better.

It's a testament, not only to the organization, but to the city, as well. Life as an Atlantic League ballplayer isn't glamorous. The pay is minimal, the travel is rigorous and your situation as a player is tenuous. You only wind up in independent ball if you can't latch on with a big-league organization or overseas, where the pay is substantially better.

Yet, when players arrive in York to play for the Revs, there's something about the experience that sticks. It becomes a place they enjoy playing and are happy to be, even if it isn't their most desired destination.

"I wanted to play," infielder Josh Wilson said. "The reason I came last year was because of Mase (manager Mark Mason) and proximity to my home in Pittsburgh, and I wanted to play again."

When Wilson arrived in York before the start of last season, he was just a year removed from playing in the major leagues, where he spent parts of eight seasons of his career. At the time, his stint in York could be viewed as a minor detour in a path to get back to the big leagues. Now, back for his second year and at 36 years old, the chance to get back to the major leagues seems more and more remote for Wilson. The love of the game, however, and his newfound love for the team, allowed him to work up the passion and energy to go through another offseason of workouts just to play another season for the Revs.

First full workout: When York had its first full workout of its abbreviated spring training on Tuesday at PeoplesBank Park, Wilson wasn't the only familiar face back with the team. A total of 12 players were either part of either last year's first-half Freedom Division championship team or on the team's playoff roster. A few others have had prior experience playing for the club.

The trend of guys returning to the Revs isn't a new one, either. In fact, this year's team is relatively unrecognizable, in terms of having familiar faces, compared to past clubs. One of the longest-tenured players on this year's team is third baseman Bryan Pounds, who is entering his third season with York. In past years, guys such as Corey Thurmond and Salvador Paniagua spent five-plus seasons with the franchise.

"The fan base," Pounds said when asked why he keeps coming back to York. "Coming from a big city (Houston), not that York is a small town or anything, it's a good atmosphere. Fans come ready to see good baseball and hopefully we put a good show on for them."

Travis Witherspoon is another one of the returning players from last year's team, but he hasn't quite been with the club for a year. He joined the Revs part way through the first half of last season in a trade with the rival Lancaster Barnstormers, helping to vault the team to the first-half division crown and earning an all-star bid as a member of York.

When he couldn't catch on with a team in affiliated ball or in a bigger league, Witherspoon jumped at the chance to return to a place he's familiar with. He knows that the guys he played with for the Revs last year made his short-lived experience worth coming back for more.

"We had a great team last year and a great bunch of guys," Witherspoon said. "We had fun all year, and I think that's the main thing you ask for when you're with a team, is that you have a bunch of guys that you can have fun with and can enjoy the six months that you're with them every day."

Desirable destination: Entering its 11th season in the Atlantic League, you can argue that York is one of the more desirable destinations for a player in independent ball. With the steady dose of players willing to return to the area, it becomes more enticing for other players who haven't previously played for the Revs to give it a shot.

Players latch onto the community. They enjoy a team that promotes its history of getting players signed by major league organizations or overseas. They revel in a winning tradition that's reaped two Atlantic League championships and numerous playoff appearances. York is becoming a destination for players in the league, even if independent baseball isn't where players want to be.

"We don't hold guys back here," Mason said. "So, a lot of guys, they get phone calls, I make sure right away they know what's going on and we want to do what's best for them, whether that's a career move to go back to the big leagues or to go make more money somewhere else."