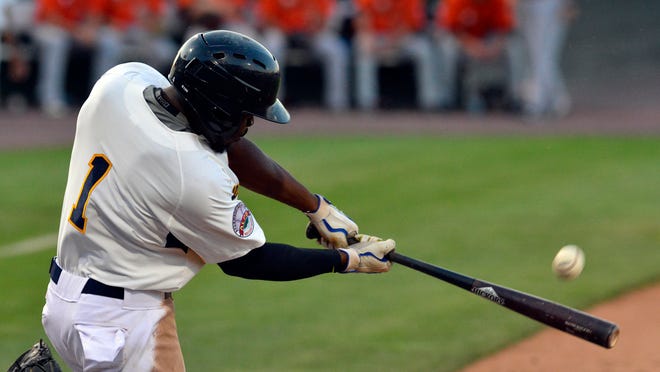 After having two of its best offensive players — Telvin Nash and Isaias Tejeda — picked up by major league organizations over the last couple days, York is in desperate need of finding new forms of offense.

And while the Revs didn't necessarily knock the cover off the ball on Wednesday night, they may have just found some secondary options at the plate.

With the game tied 1-1 going to the bottom of the eighth inning, recently acquired Travis Witherspoon led off the bottom half of the frame with a game-winning solo home run, helping York to a 2-1 win over the Long Island Ducks and completing the three-game sweep at PeoplesBank Park.

The hit was not only Witherspoon's first home run since joining York (34-25), but it was also one of three he had in the game, giving him hits in all six games since joining the Revs. Mike DeMark made Witherspoon's solo homer hold up as the winner by converting his Atlantic League-leading 19th save of the year in the ninth.

York fell behind early in the game when Long Island (32-27) struck first with a run in the top of the second off of Revs' starter Frank Gailey. However, that was the only problem inning he faced all night, going seven strong innings, allowing just the lone run on four hits, a walk and striking out seven.

While he didn't pick up the win, Gailey's effort on the mound was enough to keep York in the contest until Michael Rockett tied things up at 1-1 in the bottom of the fifth on an RBI single. Scott Rice wound up earning the win for the Revs, pitching a scoreless top of the eighth before Witherspoon launched the eventual game-winning homer.

York did record eight hits in the contest, although all of them came from the top part of the order. Witherspoon led all hitters with three hits, while Rockett had two, followed by one-hit performances from the 3-4-5 guys in the order, Joel Guzman, Michael Burgess and Andres Perez.

With the victory and losses by the Sugar Land Skeeters and Lancaster Barnstormers on Wednesday night, the Revs' lead in the Freedom Division standings is up to four games over Sugar Land and four and a half games over Lancaster with just 11 games to play in the first half of the season.

After finishing a six-game homestand with a 4-2 mark, York now heads on the road to face the Southern Maryland Blue Crabs for a four-game series beginning on Thursday. First pitch for that contest is scheduled for 7:05 p.m. at Regency Furniture Stadium.