Thanks to a big sixth inning on Sunday, Jacobus is headed to the Susquehanna League baseball semifinals. 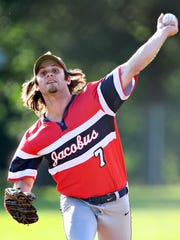 Mike Crowe, seen here in a file photo, got a complete-game victory for Jacobus on Sunday in a 5-2 win over York Township. (Photo: The York Dispatch)

Thanks to a big sixth inning on Sunday, Jacobus is headed to the Susquehanna League baseball semifinals.

The Jackals trailed at York Township 2-0 after five innings in the second game of their best-of-three quarterfinal series. Jacobus, however, plated five unanswered runs in the top of the sixth to take the lead for good en route to a 5-2 triumph.

Jacobus won the series opener at home on Saturday, 7-5.

Jacobus will face an opponent to be determined in the semifinals, with Game 1 in of the best-of-3 series beginning on Tuesday, Aug. 13.

Offensively for Jacobus, Brian Crimmel went 2 for 3, while Dan Waldrup went 2 for 3 with one run scored.

For Township on Sunday, Dennis Porter went 2 for 3 with one RBI. 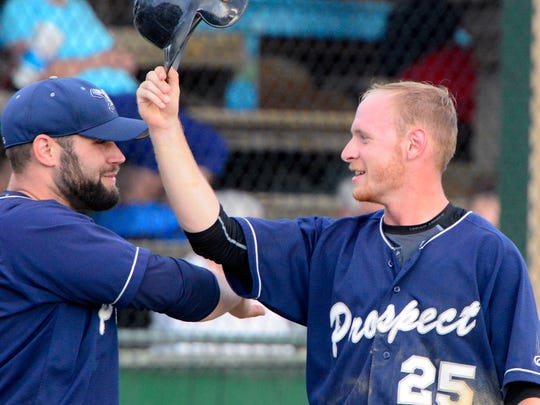 East Prospect's Devin Strickler, right, seen here in a file photo, had seven hits in the Pistons' sweep of Felton over the weekend. (Photo: The York Dispatch)

East Prospect moves on the semifinals and will face an opponent to be determined, with Game 1 of the best-of-3 series beginning on Tuesday, Aug. 13.

Prospect finished with 33 hits. Seth Lefever pitched a two-hit shutout for the win.

Stewartstown 5, Windsor 3: At Windsor, Cody Brittain led the visitors to the victory by throwing a complete game, striking out 12 and walking seven, while allowing two hits and two earned runs.

Brittain also connected at the plate by going 2 for 3 with two runs scored.

Stewartstown evened the best-of-3 first-round series at 1-1 and will face Windsor at 5:45 p.m. Wednesday in the deciding Game 3 at Stewartstown.

Also for Stewartstown, Jere Preston went 2 for 3, including a double, with two RBIs and two runs scored, while Jim Klingerman doubled with one RBI.

For Windsor, Grant Schwartz went 1 for 2 with one RBI and two walks, while Shawn Wilson doubled.

Conrads 6, Hallam 1: At Conrads on Sunday, Ben Bills led the home team to the victory by throwing a complete game, striking out seven, walking one and allowing no earned runs.

Bills also connected at the plate with a double and one run scored.

For Hallam, Eric O’Neil went 2 for 3, including a double, with one run scored. Teammate Corey Knaub went 1 for 2 with one RBI.

Hallam 3, Conrads 1: At Hallam on Saturday, Matt Ruth pitched a four-hitter, striking out 10 without a walk to get the win.

Ruth didn't give up an earned run.

Mount Wolf 6, Pleasureville 2: At Mount Wolf on Sunday in the second game of a doubleheader, Jeremy Bentzel pitched a complete-game five-hitter to get the win.

Devin Dellinger had two hits, including a homer, with two RBIs and a run scored to lead Pleasureville.

Mount Wolf 13, Pleasureville 2: At Mount Wolf on Sunday in the first game of a doubleheader, Burnside and Donovan Oaks combined on an eight-hitter.

Burnside went the first four innings to get the win, striking out five and walking none. Oaks went the final three frames. Each pitcher gave up one earned run.

Reed went six innings to get the win, striking out nine and walking two.

Wagner had three hits for Pleasureville.