Pleasureville is one win away from sewing up a Region 4 American Legion playoff spot. Post 799 earned a 10-0 win vs. Southwest York on Wednesday. 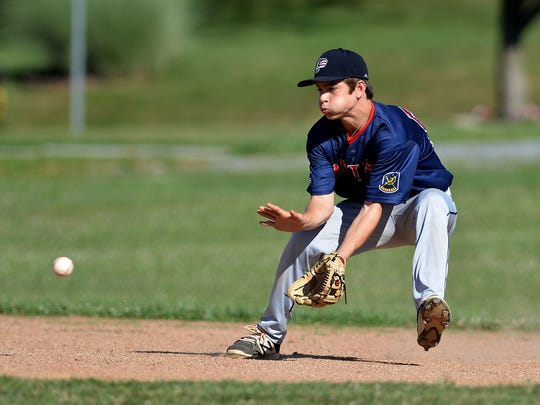 Pleasureville is one win away from sewing up a Region 4 American Legion playoff spot.

Post 799 earned a 10-0 triumph over visiting Southwest York on Wednesday in a second-round York-Adams winners' bracket contest in the double-elimination tournament.

The game was ended after six innings because of the mercy rule.

No. 5 seed Pleasureville (10-4-2) now advances to the winners' bracket final at 5:45 p.m. Friday at No. 1 seed New Oxford (15-0). The winner of that game is guaranteed a spot in the Region 4 event. The York-Adams league will send two teams to the Region 4 playoffs.

No. 2 seed Northeastern plays host to No. 3 seed Dallastown at 5:45 p.m. Thursday in another elimination game.

Post 791 (9-5) used a two-run sixth to overcome a 5-4 deficit and eliminate Red Lion (5-11) in the double-elimination playoffs. Brayden Smith's RBI double tied it and Andrew Chronister's RBI triple gave Dover the lead for good. Nate Ifkovits pitched three innings of three-hit shutout relief to get the win, striking out three without a walk.

Dover will face Southwest York at 5:45 p.m. Thursday in another elimination game at a site to be determined.

New Oxford 7, Dallastown 1: At New Oxford on Wednesday, the top-seeded home team moved to 15-0 on the season.

Blake Phillips pitched a five-hit complete game to get the win. New Oxford had just four hits, but took advantage of four Dallastown errors and four walks allowed by Dallastown's pitchers. Only two of New Oxford's runs were earned.

Peyton Megonnell and Colin Miller each had two RBIs for New Oxford. Peyton Fox had two hits and an RBI for Dallastown (10-5-1), which will travel to Northeastern in an elimination game at 5:45 p.m. Thursday.

Mount Wolf 4, East Prospect 2: At Mount Wolf on Wednesday, the Wolves knocked off the Susquehanna League leaders in an interleague contest.

Mark Burnside pitched a complete-game six-hitter, allowing one earned run. He struck out two and walked two. Jesse Sargen led the Mount Wolf offense with two hits, including a double, to go with two runs scored and an RBI.