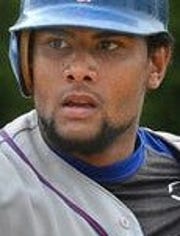 EAST PROSPECT — For the first time ever on Memorial Day, the Susquehanna and Central leagues squared off against one another for a full slate of interleague baseball contests.

The day was highlighted by a meeting of reigning league champions.

As one would expect, East Prospect, which claimed a second consecutive York County Baseball Championship last season, and Stoverstown put on quite a show. The host Pistons managed to get on the board in the bottom of the first inning against Tigers starter Ryan Kehr.

That seemed like it would be all that veteran southpaw Dylan Stoops would need. The former Eastern York High School standout cruised through the first five innings unscathed.

Bonilla comes up big: The visitors, however, rallied in the top of the sixth, loading the bases with one out. After a fielder’s choice grounder resulted in the potential tying run being eliminated for at the plate the second out, Stoverstown newcomer Xavier Bonilla came to the plate.

Having struck out in each of his previous two appearances, the left-handed hitting Bonilla worked the count full against Stoops. After fouling off the first full-count offering, Bonilla came up with a big two-out single to right to give the Tigers the lead.

That was just enough for the visitors. Levi Krause closed out an exciting 2-1 triumph in favor of the reigning Central League champions.

Stoops recorded both of his strikeouts of Bonilla with fastballs, but the former Hallam and Conrads star guessed right that Stoops would try to approach this at-bat in reverse. Instead of getting ahead with curve balls, Stoops stuck with the fastball against Bonilla in the sixth. Then, with the count full, he tried to fool him with a curve ball.

“I knew that he was coming with it and he hung it,” Bonilla said. “And I took it with me.” 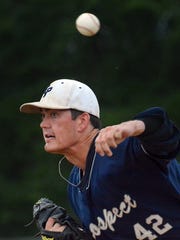 Stoops, Kehr excel on mound: Bonilla’s knock was one of just six hits that Stoops allowed all day. Zach Schuler (three singles) and Joe Capobianco (single, walk) had the most success for the Tigers against the EP southpaw.

Kehr was similarly effective, although not quite as flashy as Stoops, who fanned 13. The right-hander allowed just four hits over five innings while fanning three.

“Ryan did an outstanding job pitching for me today,” Stoverstown manager Tim Thoman said. “He just made one mistake to Jordan (Higgins) and we know that Jordan is a really nice hitter from his time at Jefferson.”

The Pistons were able to take the lead early when newcomer Jordan Higgins ripped a two-out double that drove in Hunter McClintock in the first inning.

Tigers' key rally: After that, Stoops was able to set down the Tigers seemingly with ease. Schuler and Capobianco were the only ones to collect hits over the first five frames. Back to back hits by Schuler and Brandon Warner to start the sixth began the rally. After a flyout and a walk, Krause came to the plate, but he laced a grounder to third that resulted in Schuler being forced out at home.

That set the stage for Bonilla.

“Xavier stepped up and got the big hit,” Thoman said with a grin. “We needed it.”

The Pistons tried to rally in the bottom of the frame, but Krause got out of a mini-jam by stranding runners on first and third by fanning Dillon Good.

“This is a tough game to lose for either side,” Thoman said. “But we got the breaks.”

Stoops' effort wasted: The Pistons, who had to wait around for more than an hour to play the regularly scheduled second game of a Memorial Day doubleheader against Stewartstown later Monday afternoon, were clearly disappointed to see an outstanding effort by Stoops go for naught.

“They’re a very good team and it was a good baseball game,” EP skipper Mark Toomey said. “But that’s the way it goes sometimes.”

Higgins (single, double) was the only Pistons players to collect multiple hits.

Glen Rock 8, York Township 1: At York Township, Conor Miller pitched a two-hit complete game for Glen Rock. He struck out five and walked two to get the win.

Zachary Kauffman pitched 1 2/3 innings of hitless, shutout relief to get the save. Daymond Zweizig pitched five innings and gave up four runs to get the win.

Conrads 6, Vikings 1: At Conrads, Randy Stewart pitched five innings of four-hit ball to get the win, striking out one without a walk, while allowing zero earned runs.

Pleasureville 2, Windsor 1: At Windsor, Beau Burris pitched a three-hit complete game to get the win, striking out 13 and walking one.

Devin Dellinger had two hits, including a homer, with two RBIs and a run scored to lead Pleasureville's offense. Robin Summetz doubled for the winners. Connor Dewees homered for Windsor's run.

Manchester 5, Hallam 0: At Hallam, the Indians grabbed the interleague win.

No other details were available.

East Prospect 8, Stewartstown 4: At East Prospect, Ryky Smith led the Pistons by going 2 for 2, including a homer, with three RBIs and two walks.

Also for Prospect, Mark Schauren doubled with two RBIs and one run scored, Devin Strickler went 1 for 2 with two runs scored, D.J. Ream doubled and relief pitcher Mike Specht threw the final 2 2/3 innings, striking out two and walking none, while allowing no runs and two hits to pick up the win.

York Township 6, Felton 5: At York Township, Andy Freeburger led the home team by going 1 for 1 at the plate, with two runs scored, one RBI and one walk.

For Felton, Ryan Nace went 3 for 4, including a double, with two runs scored and one RBI; Brandon Zeigler doubled with two RBIs and one run scored; and Zach Townsend threw a complete game, striking out 10, walking two and allowing four earned runs.

Jacobus 5, Conrads 4: At Jacobus, Brian Crimmel led the Jackals by going 2 for 4, including a double, with one run scored.

Also for Jacobus, Kyle Saxman went 1 for 2 with two RBIs, Tyler Taylor doubled with one run scored and three walks and relief pitcher Brett Alaimo threw the final three scoreless innings, striking out two and walking one to pick up the win.

The home team plated the tying and winning run in the bottom of the seventh to record the walk-off victory.

Hallam 8, Windsor 4 (8 innings): In the conclusion of a suspended game from earlier in the season, Angel Matias led the Express with a homer, three RBIs and two runs scored.

Also for Hallam, Dan Wecker went 2 for 4 with two doubles and two runs scored, Matt Ruth went 2 for 4 with one RBI and Kerry Clark threw five innings, striking out eight, walking four and allowing one earned run but received a no-decision.