A strong pitching staff has carried Pleasureville back to the Region 4 American Legion baseball playoffs. 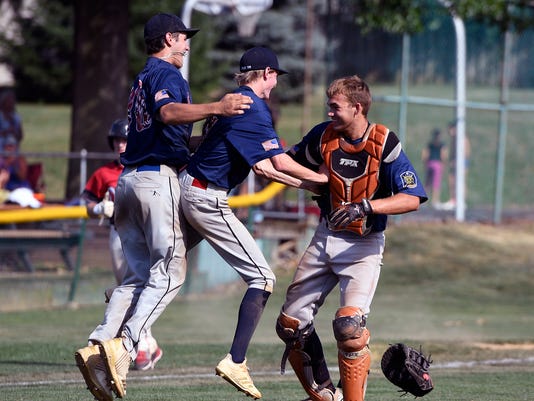 Success is something that Pleasureville Post 799 coach Elliot Ness refuses to take for granted.

Even after repeating as the York-Adams American Legion playoff champion this past weekend by sweeping Dover in the finals on Sunday, Ness understands that success one day doesn’t guarantee the same result the next.

That lesson was learned last summer during the Region 4 Tournament in Lebanon County. Ness and the Pleasureville boys stormed out to a 3-0 record after the first three days of the draw only to drop their final two contests, falling a game shy of reaching the state bracket.

While a fair number of the stars from the 2017 squad have been replaced by younger talent this season, Ness remains hopeful that his squad will answer the bell for the 2018 tournament at Diller Field in Hanover.

“We have five or six key guys back from last year,” Ness said. “So the balance is (with the) younger guys, and that’s great. It should be a great experience for these guys.”

Stellar pitching: Much like the recipe that landed them the league's regular-season and playoff crowns a season ago, this year’s Post 799 squad hangs its hat on pitching. Pleasureville enters the draw with a minuscule 1.42 earned-run average as a team.

“Grant Smeltzer and Josh Marquard had our lowest ERAs,” Ness said. “And I’ll tell you about Josh … he just throws strikes. He pitches to contact and he has a good fastball and he can really throw three pitches for strikes. I think he only walked two guys all year.”

While those two were the team’s top pitchers this summer so far, Ness seems to be leaning toward getting the tournament going by throwing Mike Livingston in the scheduled opener Friday at 9:30 a.m. against an opponent to be determined.

“Mike is one of the guys that played for us last year,” Ness said. “Now it’s not 100 percent right now, but I’m leaning that way.”

Livingston was the Y-A American Legion playoff most outstanding pitcher a season ago, while Ben Peterson was this year’s most valuable player in the playoffs.

The X factor for Ness is his lineup. If the Pleasureville bats get on a roll over the tournament, Ness is confident his team will prevail.

Missing key players: Myers, however, will only be around for Friday’s contest before he leaves for a family vacation this weekend.

If not having Myers around wasn’t enough, Ness will be without his outstanding shortstop in Ryan Pepler. Pepler will be forced to sit out the Region 4 draw after accepting an invitation to play in the Big 26 Baseball Classic in Harrisburg this weekend.

“I know that some of the other coaches that got that email are very upset,” Ness said of a communication from the Region 4 director that ruled players in the Big 26 games as ineligible. “I know that one of the coaches is threatening to go to the national Legion board about it. To me, I don’t know how you can penalize a kid for playing in the Big 26.”

Hanover also in regional: Just like last year, Post 799 won’t be the only Y-A representative in this year’s field. Hanover earned an automatic berth by virtue of hosting the eight-team bracket.

The home team, however, posted a 4-9-1 record this season that placed them seventh in the eight-team Western Division. Hanover opens up against New Cumberland at 5:30 p.m. Friday.