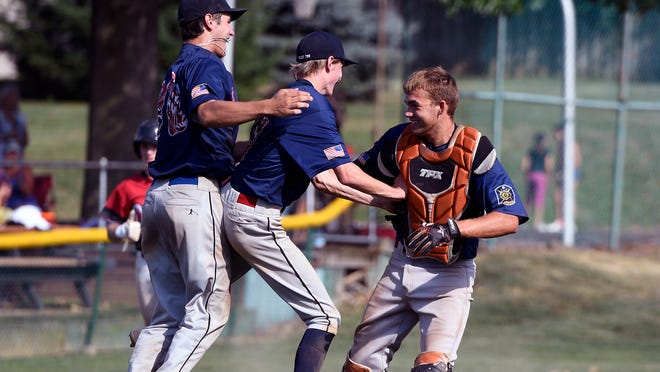 SPRY — Sporting some momentum when they pulled into Shyrock Field, yet knowing they needed two wins to get where they wanted to go, a group of Pleasureville players arrived determined to claim a pair of must-have victories.

Adding even more impetus to Pleasureville’s drive was the humbling yet maddening double-digit setback they were dealt Friday night by the Dover squad that just happened to be parked in the opposite dugout.

Several hours and two wins later, it was Pleasureville celebrating yet another York-Adams American Legion baseball championship that brought a return trip to the Region 4 tournament that begins later this week in Hanover.

Payback — in the form of convincing 9-1 and 9-3 victories on Sunday — belonged to Pleasureville.

Of course, Pleasureville (15-2-1) needed to collar a 5-4 victory over New Oxford in a win-or-else contest Saturday night just to get to Sunday’s action in the double-elimination tournament.

And, with a 15-4 loss to Dover on Friday still fresh, Pleasureville didn’t squander the opportunity.

Peterson shines for Pleasurevile: Most Valuable Player Ben Peterson finished one batter short of pitching a complete game the opener, scattering six hits while fanning four and walking three before giving way to Nick Myers for the final out. Peterson threw 105 pitches.

“All my stuff was working today,” Peterson said. “My curveball, fastball.”

Peterson also collected three hits in four trips, scoring one run with a head-long slide across home plate and knocking in another with a sixth-inning single.

“I personally thought we had nothing to lose, so leave it all on the field,” Peterson said. “Trying to get hits in big opportunities and not holding back.”

Fast starts: Ness also delivered a big hit, popping a two-run single in the top of the first inning that helped Pleasureville build a 3-0 lead.

Pleasureville actually sported 3-0 leads after the opening innings of both games, meaning Dover spent the entire afternoon playing uphill. And it proved to be too much for Bryce Smith’s bunch, which totaled 11 hits in the twinbill.

“As the away team twice and you come out and put runs on the board first, it’s a relief,” Pleasureville manager Elliot Ness said. “It bursts the other team’s bubble a bit, has them hanging their heads and also gets your pitcher to go out there and throw strikes.

“Pitch to contact, don’t try to strike everyone out and rely on your defense.”

“Our kids came out a little flat-footed today and probably a little nervous,” Bryce Smith said. “It’s been a long time since Dover’s been here.

“Obviously, Pleasureville wanted it a little bit more than us today.”

Staying on the attack: Buoyed by its 3-0 start in the opener — Ness and Cannon Maye rapped run-scoring singles, while Reid Hershner plated the final run with a double to left-center — Elliot Ness’ confident club continued to stay on the attack throughout.

Myers’ RBI single and Mike Nizinski’s run-scoring knock in the top of the second had starter Nathan Chronister in a 5-0 hole — Nizinski finished 3 for 3, scored three runs and drove in one — before Dover authored any sort of response.

Nizinski didn’t even play in Game 2 because he had a work commitment, but it didn't matter.

Maye and Hershner each finished with two hits — Maye added a two-run single in the fourth — as eight players totaled 14 knocks in Game 1.

Brayden Smith was the lone Dover competitor with two hits.

Game 2: Once Myers polished off the final out in the home half of the seventh, Pleasureville turned its attention to Game 2 and backing up its 2017 title with a 2018 crown.

Again, a 3-0 lead had Landon Ness feeling somewhat relaxed as he strolled to the hill.

Toby Goebeler collected two of Dover’s five hits in Game 2. Wyatt Barton drove in two runs with a sixth-inning single that made it 7-3, but little else went favorably for Dover.

Soon, once the payback had been issued, the celebration was on.

“We had success last year and I think we’re going to bring that in,” Peterson said, referring to the Region 4 tournament. “We’re a winning team.”