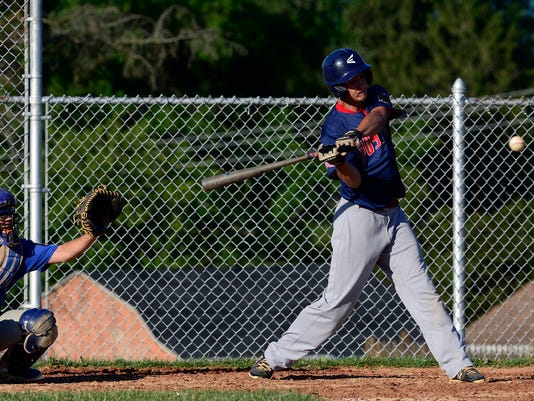 Pleasureville's Landon Ness, seen here in a file photo, had two hits (including a homer), two RBIs and two runs scored on Tuesday in a 7-6 win over Stewartstown. YORK DISPATCH FILE PHOTO(Photo: The York Dispatch)Buy Photo

Stewartstown jumped out to a 5-0 lead after three innings, but visiting Pleasureville got back into the game with a four-run fourth. Post 799 added two in the fifth and one in the sixth to grab the win.

Dallastown 6, Glen Rock 2: At Glen Rock, the visitors got three hits and three RBIs from Carson Wolf in the win.

Ben Writer got the win, throwing four hitless innings, striking out eight, but walking seven and allowing two earned runs. Joe Munoz added three innings of two-hit shutout relief to get the save.

Hallam 9, East Prospect 6: At Hallam, the home team jumped out to an 8-2 lead after three innings and held on to beat the first-place Pistons.

Windsor 6, York Township 5: At Windsor, the home team scored five runs in the first two innings and then held on.

Tyler Stabley (four hits, double, run) and Cole Daugherty (two hits, two RBIs, run) paced the Windsor attack. Shawn Wilson got the win, allowing three earned runs over 6 2/3 innings, striking out six. Stabley pitched a third of an inning to get the save.

Conrads 10, Jacobus 2: At Jacobus, the visitors erupted for eight runs in the first two innings and never looked back.

Justin Kilpatrick had two hits, an RBI and a run scored for Jacobus.

Felton 5, Stewartstown 1: At Felton, Cole Delp led the Ducks to the victory by going 2 for 3, including a homer, with three RBIs and one run scored.

For Stewartstown, Marcus Stevenson went 1 for 2 with one RBI.

Manchester 12, Pleasureville 0: At Manchester, Jeremy Pagano threw a one-hit shutout to lead the home team to the victory.

Pagano allowed one single, struck out one and walked one.

Also for Manchester, Logan Allison went 3 for 3, including a double; Chris Biechler went 3 for 4 with two RBIs; and Trey McWilliams doubled.