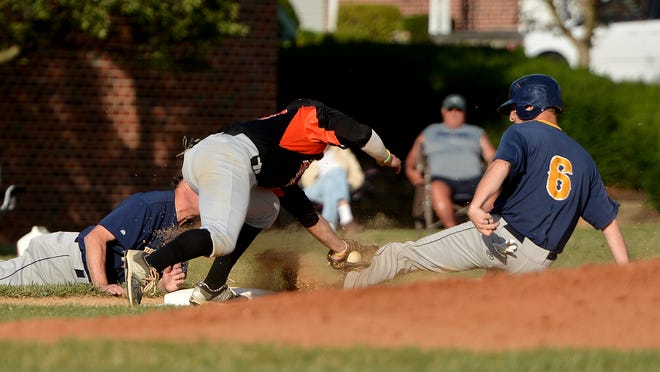 On more than a few occasions, the Tigers would break open close games by putting up big numbers in the sixth. That approach powered Stoverstown to the Central League and Tom Kerrigan Memorial playoff titles.

Tuesday evening at Mount Wolf, the visitors were again up to their old tricks. The Tigers plated seven runs in the sixth to rally from a two-run deficit.

Manager Tim Thoman’s club then tacked on two more runs in the seventh on a pair of long balls, one of which came off the bat of slugger Austin Botts, to claim a satisfying 12-5 triumph over the Wolves.

“We never really get down on ourselves,” said Botts, who finished with two homers and a double in four at-bats. “We know that at any time we can erupt. It’s just the confidence of knowing that we can come back at any time.”

Erupting is certainly a real possibility whenever Botts is at the plate. The Stoverstown catcher is now hitting .588 (20-of-34) for the season, with four doubles and five home runs.

“Bottsy had another great night,” Thoman said of his catcher, who hit a two-run homer in the first inning. “And with our lineup, it’s nice to have the ability to put together an inning like (the sixth).”

Stoverstown (10-6) was aided by some erratic pitching by Mount Wolf in the sixth when the home team walked five batters during the seven-run inning. That big inning turned a 5-3 deficit for the Tigers into a 10-5 advantage.

Krause shines on mound: That was more than reliever Levi Krause needed. The right-hander came on after starter Brandon Warner allowed five runs over the first two-plus innings. Krause shut the door. He surrendered just two hits while striking out five to pick up his sixth victory of the season while lowering his ERA to 1.49.

“Levi really stepped up,” Thoman said. “He came in and I was a little short on pitching, but Brandon and Levi split it up and it worked out great.”

Dustin Kuhn finished with two hits, including a first-inning, two-run homer that tied the game up for Mount Wolf. Dan Dierdorff drew a couple of walks and scored twice for the Wolves, who dropped to 9-8.

Stoverstown’s victory kept the Tigers in the thick of the Central League standings at the halfway point of the season. Thoman’s club is now mired in a virtual four-way tie along with Manchester (11-7), Glen Rock (10-6) and Jefferson (10-6).

Manchester 13, Dillsburg 5:At Manchester, Jonah Latshaw led the offense for the home team by going 3 for 5 with two RBIs. Also for Manchester, Brayton Bare went 2 for 2 with four RBIs, while Tyler Lingg started the game on the mound and threw five innings, striking out six and walking two to record the victory. For Dillsburg, Dalton Miller doubled.

Conrads 3, York Township 2: At Conrads, Nathan Boushell homered and drove in two runs to pace the home team. Kevin Keesey (two hits, RBI) and Joe Yourgal (two hits) also excelled at the plate for the winners. Jake Herr went 6 1/3 innings to get the win, allowing two runs while striking out six. Steven Lehman needed just four pitches to get the final two outs and record the save. James Guiseppe went the distance for Township, allowing two earned runs and fanning five. Maxwell Nail had two hits and two RBIs for the visitors, while Derek Pitzer had two hits, including a double, with a run scored.