Sean Bair led New Oxford to consecutive 20-win seasons before he left to join the NCAA Division I staff at Arkansas led by a former NBA coach. 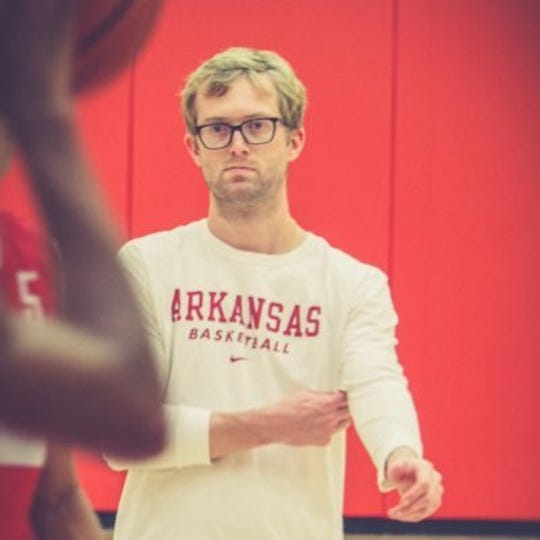 Sean Bair just wanted an opportunity to chase his dream.

The former New Oxford High School boys’ basketball coach didn’t want to leave the program he spent years building, but he knew that he had to do it. If he didn't leave, he would be going against everything he preached to his players about working toward reaching their full potential. So, he sent out multiple applications for NCAA coaching positions, but never got the shot he desired.

Then Bair saw an opening for a position as a graduate assistant for the University of Arkansas on hoopdirt.com and took a chance. Some helpful connections got Bair a phone interview, and after a pair of conversations, Bair was offered a chance to go from coaching in the York-Adams League Division I to NCAA Division I for the 2019-2020 season.

“It wasn’t a situation where I was jumping to leave New Oxford, but I definitely had it in my mind that if I could get an opportunity to try to transition into working in basketball full time — especially if it was a good one — I should probably try and take it,” Bair said. “It was really lucky on my part that the one that did come together for me was probably the best opportunity I was going to get.” 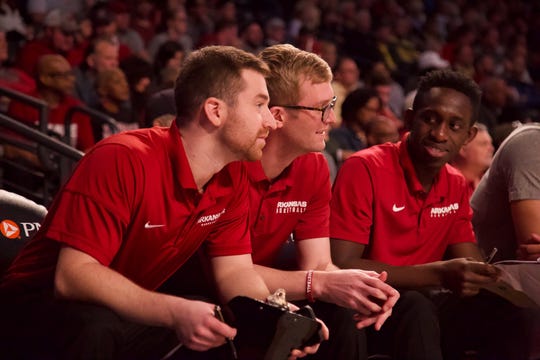 Tough to leave: The hardest part for Bair about the move was leaving the Colonials’ class of seniors — a class he had spent so much time with over the years. The Colonials won a combined nine games in Bair’s first two seasons and had consecutive 20-win campaigns before his departure.

This past season, a New Oxford team led by reigning Y-A D-I Player of the Year Abdul Janneh, reached the quarterfinals of the 5-A state tournament.

The timing of the decision to leave made it even more difficult for Bair, who knew the 2019-2020 Colonials had a chance to have a historic season.

The only way I know how to teach and coach and is through love.. I’ve been so blessed to work with these kids and when you read stuff like this it’s everything — the more you love, the more vulnerable you let yourself become, the more you’ll get back https://t.co/rZhxfjT3T1

Bair attended New Oxford's 2019 graduation on a Friday and the following Monday was in Arkansas. He drove down that weekend, but the realization of the chance he had just received had not set in yet. All the times he got excited about potential jobs, just to get let down again, had left him a little scarred. When he finally secured the graduate assistant position at Arkansas, the rush of excitement was initially delayed by the exhale of relief that he landed an NCAA coaching gig.

“I had just been trying and striking out at a lot for other opportunities, so it was really just like relief that I actually got one,” Bair said. “It didn’t really register how big of an opportunity it was until I got down there.”

A big adjustment: On Bair’s first day, he was struck by the 1994 NCAA Championship trophy and the size of the facility that was dedicated to only Razorbacks’ hoops players. The difference in the facilities and talent of the players were only part of what Bair had to adjust to once he got started.

For years, Bair had control of how the New Oxford program was run. Now, he was at the bottom of the coaching hierarchy at Arkansas and could only listen and learn from the coaches with NBA experience.

Arkansas head coach Eric Musselman coached the Golden State Warriors and Sacramento Kings and assisted on multiple other staffs. Assistant coach Clay Moser worked with the Los Angeles Lakers in various roles before he joined the Razorbacks’ staff when Musselman was hired in 2019. Former NBA guard Early Boykins serves as the team's director of student-athlete development.

While he missed the ability to run a practice or call plays during a game, Bair said he changed parts of his coaching philosophy during the season because of lessons he learned that wouldn’t have been possible without the season at Arkansas.

“It’s definitely an adjustment, but it’s been a really good one and one I welcome fully,” Bair said. “I think the experience is invaluable because I’m learning from the absolute best people to be learning from.”

Earning his spot: Bair added that, at first, he had to battle the idea that, because he didn’t play at the NCAA D-I level, he had nothing to offer the players he would coach. He admitted that he lacked the ability to physically show players on the court things a former NCAA D-I player could. Still, his ability to organize and explain plans that he learned as a teacher won over some players.

Similar to how Bair created lesson plans at New Oxford, he used video of the players in games to show them where they needed to improve in practice to get their desired results. 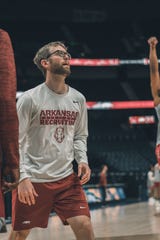 A lot of Bair’s responsibilities involved creating video packages and facilitating player workouts. Most games he was in the video capture center, but was on the end of the bench for the Razorbacks’ buzzer-beating victory over Georgia Tech, part of the Razorbacks' 20-12 season that was cut short by the coronavirus pandemic.

Bair said the biggest lesson he learned at Arkansas was that the players are going to be better than any play a coach designs. He realizes now the best coaches get their players into spots where they will be successful and let them make plays.

The former New Oxford coach was hopeful that a spot on the Arkansas support staff would be open for him next season as he continues to learn more as he grows as a coach. He’s confident in his ability to eventually run his own program, but for now, Bair just wants to be around the sport he loves and is grateful for the chance he was given.

“I would love one, but I’m also at peace knowing that it’s been a really great experience so far and if I’m working in basketball for a living, that’s plenty,” Bair said. “I already feel like I’m the luckiest guy. I just feel really blessed to be in the position that I am in and I think that I’m going to have great opportunities at some point and it’s just doing everything I can until that moment and then once I get there, do a good job.”