The latest on the coronavirus outbreak’s affect on sports around the globe (all times EDT): 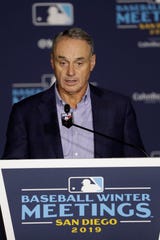 The latest on the coronavirus outbreak’s affect on sports around the globe (all times EDT):

Major League Baseball is likely to cancel the rest of its spring training game schedule due to the coronavirus. MLB probably will also announce that the start of the season will be delayed, according to people familiar with the discussions.

The people spoke to The Associated Press on condition of anonymity because no decision had been announced. They said Commissioner Rob Manfred planned a conference call with his executive council Thursday to discuss the situation and then a call with team owners.

MLB had continued to play into Thursday, when Florida Gov. Ron DeSantis said he strongly recommended to local authorities and organizers that they limit all mass gatherings.

The major league season had been scheduled to start March 26, its earliest opening other than for international games.

NASCAR will race the next two weekends without fans.

The events at Atlanta Motor Speedway and Homestead-Miami Speedway will be restricted to competitors, crews, officials and other necessary personnel to conduct the race.

NASCAR is working with public health officials to determine future scheduling beyond those events.

The NHL is following the NBA’s lead and suspending its season.

NHL Commissioner Gary Bettman announced the pause of the season amid concerns about the new coronavirus. The NBA announced Wednesday night it was suspending play, after a player tested positive for COVID-19.

The NHL has not said any player has tested positive for COVID-19. The league is halting play with 189 games left in the regular season, sparking uncertainty about how many more, if any, could be played before the playoffs.

Bettman said the NHL has tried to follow mandates of health experts and local authorities without taking premature or unnecessary measures.” Bettman’s statement said the NBA’s news made it “no longer appropriate to try to continue to play games at this time.”

A spokeswoman for the women’s tennis tour tells The Associated Press that the WTA is not moving to suspend its tournaments for six weeks because of the COVID-19 pandemic the way the men’s tour did.

Amy Binder says in an email to the AP that the WTA will announce information about upcoming events “shortly.”

But Binder says that “at this point in time” the WTA is “not looking to” impose a six-week suspension the way the ATP did earlier Thursday.

The Big East Conference basketball tournament has been canceled at halftime of Thursday’s first game because of the coronavirus outbreak.

As the Bluejays and Red Storm were playing, a few subway stops away at Barclays Center in Brooklyn, the Atlantic 10 Conference was holding a news conference to called off its tournament.

The Big 12 is canceling all of its championships through April 15, including upcoming gymnastics and equestrian meets, and will reassess the rest of its spring sports schedule April 15.

Commissioner Bob Bowlsby said he anticipated a conference-wide policy for spring football, though athletic directors have not yet discussed a plan.

The league anticipates a heavy financial hit from refunded ticket sales to its men’s and women’s basketball tournaments and having to adjust the rights fees it receives from its TV partners.

Bowlsby also said that nobody from the conference, including staff members, coaches and players, had fallen ill or been tested for coronavirus.

The Pac-12 and Southeastern conferences have gone beyond canceling just their men’s basketball tournaments.

The SEC announced within an hour of canceling the tournament that the league was suspending regular-season competition for teams in all sports on SEC campuses as well as league championships until March 30.

The Pac-12 said it was scrapping all league championship events and all competitions effective immediately and until further notice.

All five Power Five conferences have canceled their basketball tournaments, putting the NCAA Tournament in doubt.

The Big Ten, Big 12, SEC, ACC and Pac-12 conferences were all preparing to play games in large arenas across the country, but with few people in the buildings.

The NCAA had announced Wednesday that it planned to play its men’s and women’s tournament games that start next week with restricted access for the general public. The NCAA said only essential staff and limited family members would be allowed to attend the games.

The ACC announced the cancellation about 10 minutes before the scheduled start of Thursday’s first quarterfinal game featuring No. 4 Florida State and Clemson. With the tournament scrapped, the Seminoles will earn the league’s automatic bid to the NCAA Tournament after winning the regular-season title.

ACC Commissioner John Swofford presented the Seminoles with the tournament trophy on the court, while the Tigers joined them on the court instead of tipping off their game.

The men’s NCAA Tournament is one of the most popular events on the American sports calendar. March Madness draws hundreds of thousands of fans to arenas from coast to coast.

The International Tennis Federation has postponed all of its sanctioned tournaments for six weeks because of the COVID-19 pandemic, joining the men’s professional tour in suspending action.

The men’s tour announced earlier Thursday it was calling off ATP Tour and ATP Challenger Tour events for six weeks because of the coronavirus outbreak.

The WTA women’s tour has not made any comment so far related to its schedule.

The Pro Football Hall of Fame in Canton, Ohio, has postponed its first fanfest scheduled for March 21-22.

The decision was based on a statewide recommendation and advice from state and local health care officials to limit large gatherings as a safeguard against the new coronavirus.

A new date will be announced, but fans who bought tickets to the event will receive a full refund and will have the first option to purchase tickets when the event is rescheduled.

The Hall of Fame Museum is remaining open during its regular operating hours, with extra cleaning procedures. Hand sanitizing stations have been placed throughout the museum.

Major League Soccer is shutting down because of the coronavirus, according to Inter Miami owner Jorge Mas.

Mas says the target period for the hiatus is 30 days.

He told players and coaches, then held a news conference and says, “We’ve made a decision as a league this morning, as owners, that play will be suspended temporarily.”

The expansion team owned by Mas and former England captain David Beckham had been scheduled to play its home opener Saturday in Fort Lauderdale, Florida.

The Players Championship will not have spectators for the final three days at the TPC Sawgrass in Florida.

A person involved in the discussions over the new coronavirus says the policy is expected to be in place for the next several weeks, starting with The Players and extending to next week at the Valspar Championship in the Tampa Bay area. The person spoke on condition of anonymity because it has not been announced.

The only time a PGA Tour event has kept fans off the course were safety issues related to weather.

The Players began Thursday with fans. The only stipulation was they not ask for autographs. Still to be determined was who would be allowed in. The source said media and key personnel would be allowed.