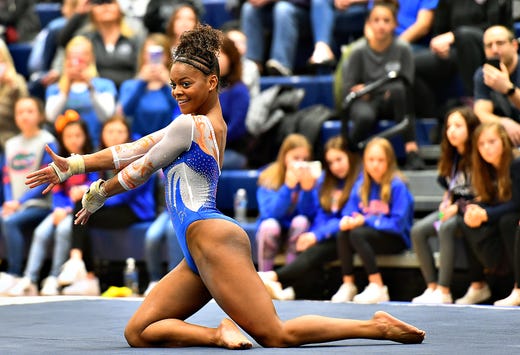 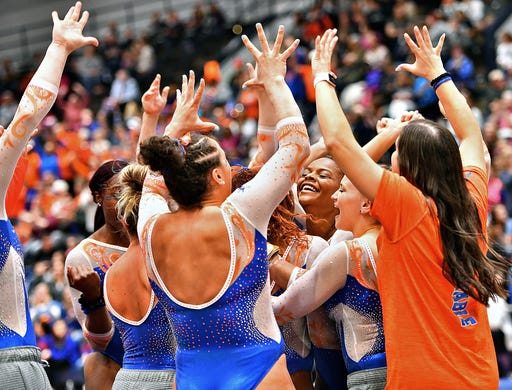 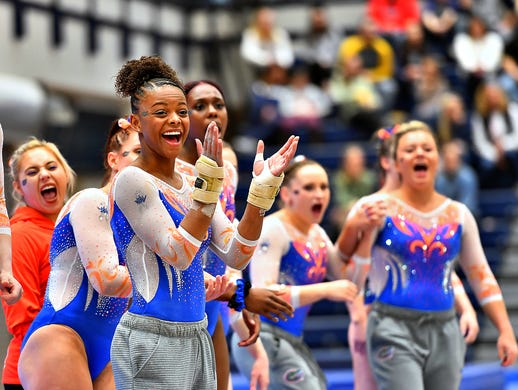 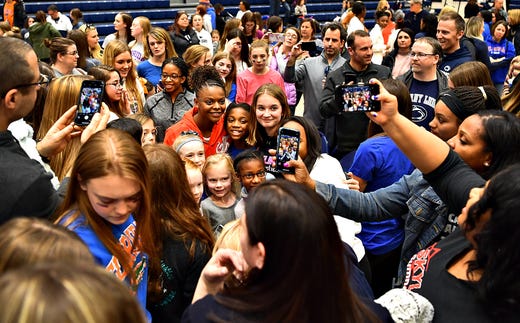 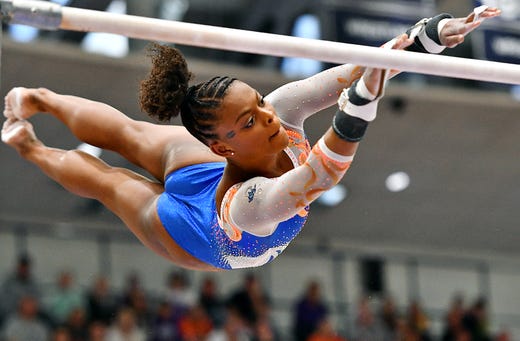 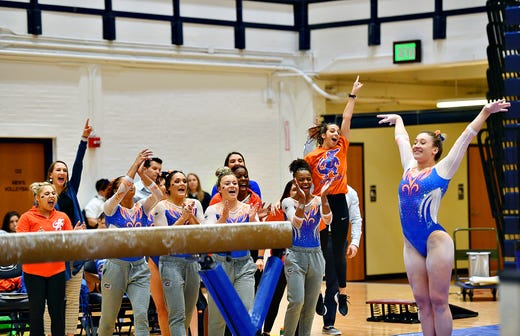 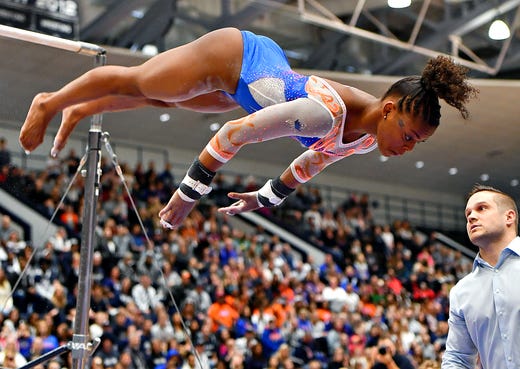 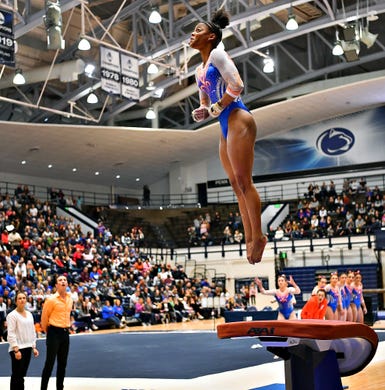 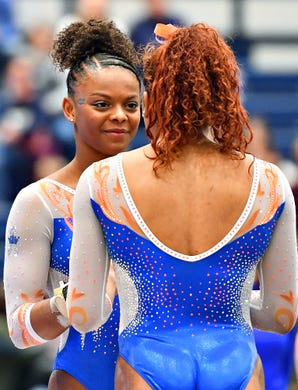 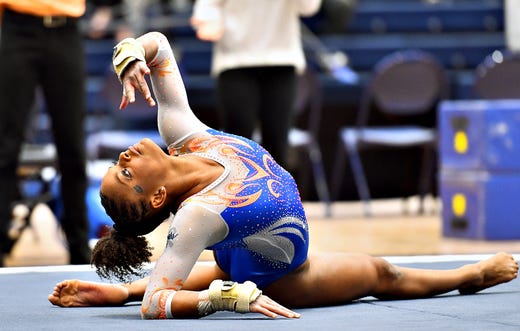 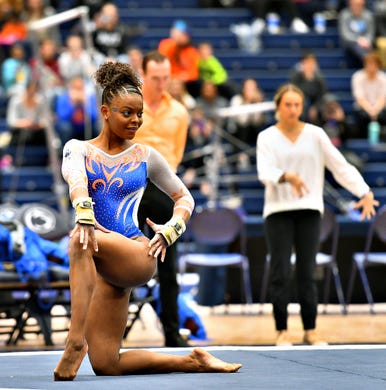 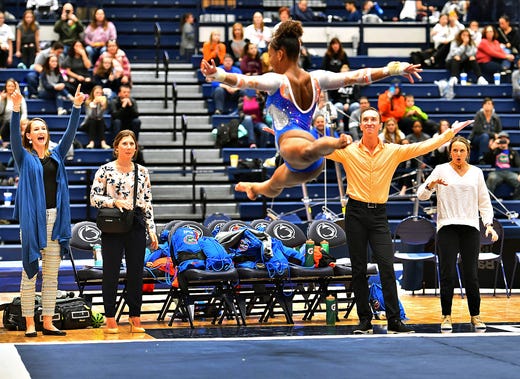 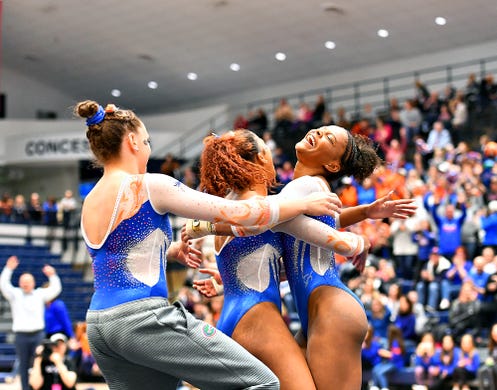 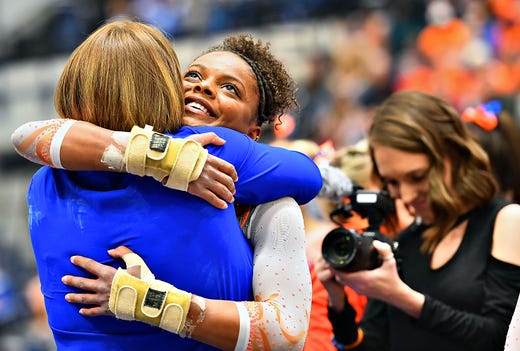 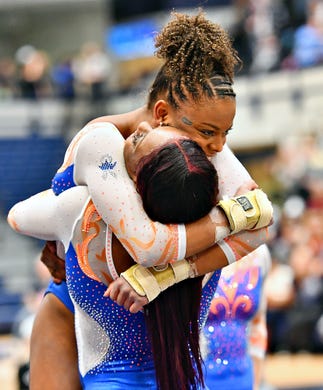 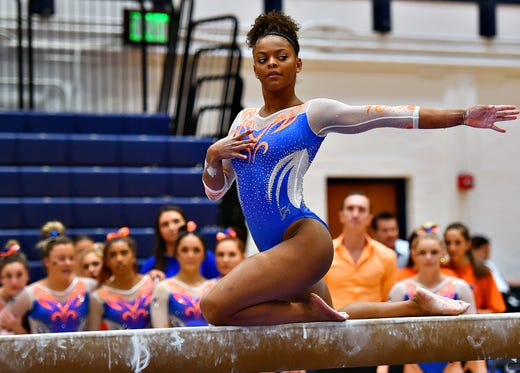 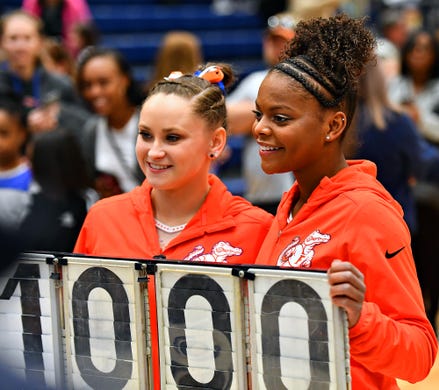 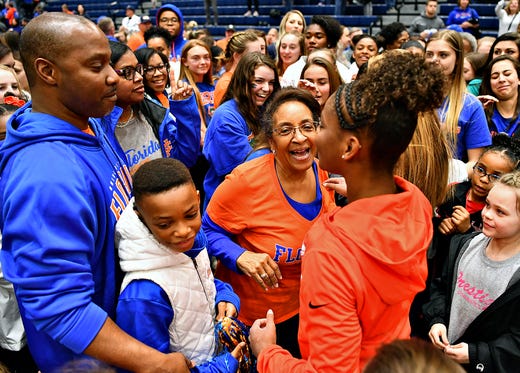 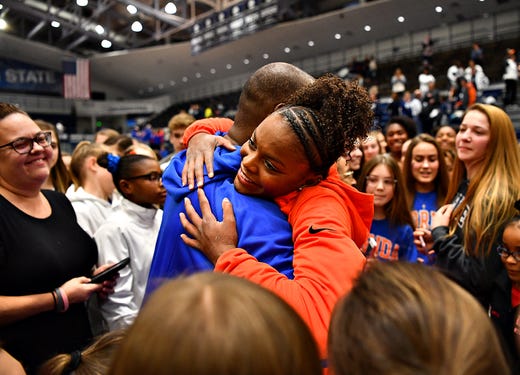 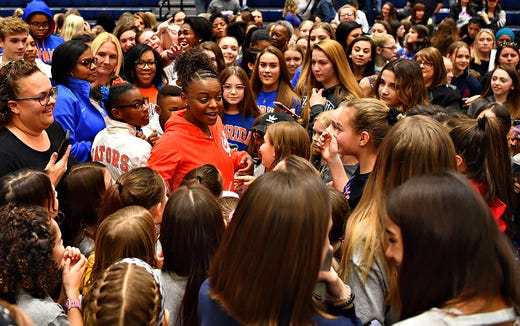 STATE COLLEGE — Saturday’s women’s gymnastics meet between the University of Florida and Penn State University was Senior Day for the Nittany Lions.

Many of the fans in the packed arena, however, showed up to see a member of the visiting team.

A reported 300 or so Gators fans donned their orange-and-royal blue gear and traveled to see Florida sophomore and former West York athlete Trinity Thomas in action. 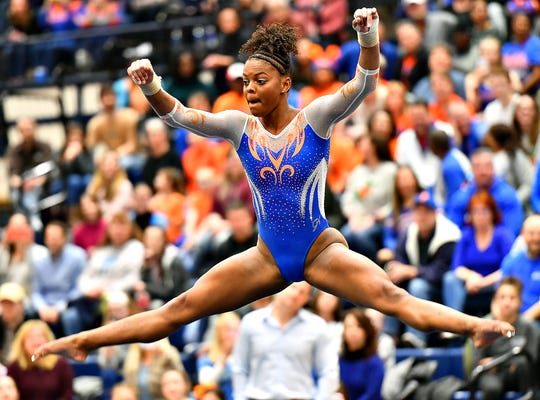 With family, friends, former teammates and fans in the crowd, Thomas’ homecoming was all she dreamed of. She helped No. 2 Florida remain undefeated (10-0) with a 198.10-196.225 team victory vs. No. 25 Penn State (8-9). She also picked up another all-around win and became the only athlete in the NCAA this season with a perfect 10.0 score in three different events.

“It was so amazing,” Thomas said, as an ever-growing sea of young gymnasts surrounded her, eagerly awaiting an opportunity to capture a selfie with the Gators standout. “People have been texting me for weeks on weeks (saying): ‘We’re coming. We’re coming.’ So, I was really excited to come back home for the first time in my entire career. So many people were here to support me and it was really great to perform for them tonight.”

A perfect performance: Thomas gave the York County fans who made the two-hour drive what they came for with her fantastic floor routine.

She previously posted perfect 10.0 scores on the balance beam (twice) and uneven bars this season. A flawless floor routine, however, still had escaped Thomas — until Saturday. With the crowd hanging on each move she made, Thomas delivered the performance that she and Florida coach Jenny Rowland knew she was capable of, capturing her fourth perfect score of the season.

“Just knowing how many people were here to support the Gators, and especially Trinity, for her to be able to attain a 10 on an event that she had yet to receive a 10 on, in front of everybody in probably her most-favorite event made for a super-special night,” Rowland said.

Thomas entered the meet in the top 10 in the NCAA in four categories: all-around (No. 1), floor exercise (tied for No. 1), balance beam (tied for No. 2) and uneven bars (No. 5). Thomas has also been the Southeastern Conference Gymnast of the Week for six straight weeks and continues to impress her coach with each accolade she earns.

“It’s not mind blowing when you see her in the gym training day in and day out, but when you take a step back and look at the whole process, it is quite mind blowing,” Rowland said. “It is unbelievable and remarkable and just shows how special of a young lady she is.” 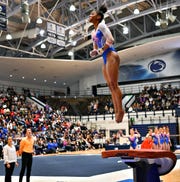 Chasing her dreams: While Thomas is dominating every meet she attends in the NCAA and prepares to make a run at a national college championship, she also has her sights on a spot on the U.S. Olympic roster for the 2020 Tokyo Games.

She is the only current member of the U.S. Gymnastics Senior Team competing in the NCAA. Despite doubt from some folks that she can do both at the same time, Thomas has the confidence that she can make both dreams come true.

“People are going to say whatever they want to say,” Thomas said. “As long as I believe in myself and I have my family and my friends cheering for me, counting on me and behind me, that’s all I need.”

Saturday’s meet served as a visual reminder that Thomas has more than just family and friends supporting her. Nearly 1,000 miles away from the university she now calls home, Thomas was swarmed by young gymnasts literally and figuratively looking up to her after a dominant performance. 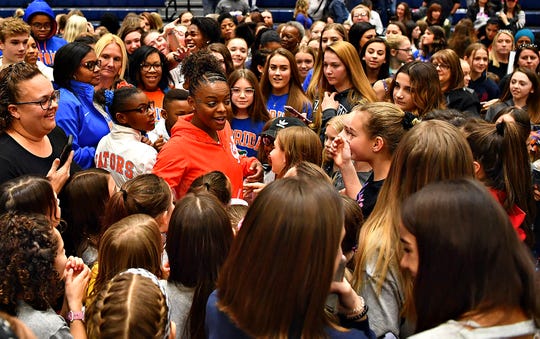 That responsibility is something she cherishes and enjoys every time she competes. It’s an opportunity to show the next generation of gymnasts that dreams are achievable, if you're willing to put in the work.

“They mean the world to me because I’ve looked up to people growing up too, and for me to be an inspiration to them is so special because that’s all I ever wanted to be for all the little girls watching me,” Thomas said. “So they know they can do anything they set their mind to also.”