The York County Bowling Proprietors Association has named its Bowlers of the Decade. 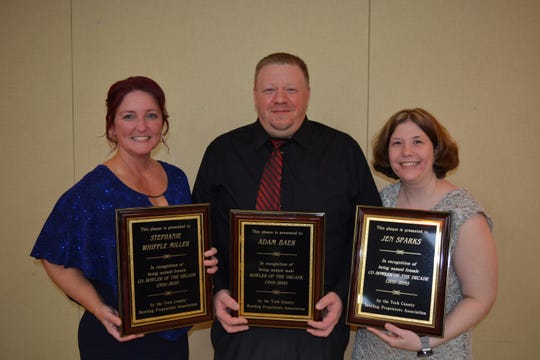 Adam Baer, center, has been named Male Bowler of the Decade by the York County Bowling Proprietors Association, while Stephanie Whipple Miller, left, and Jen Sparks, have been named the Female Co-Bowlers of the Decade. (Photo: SUBMITTED)

For the past 10 years, Adam Baer, Stephanie Whipple Miller and Jen Sparks have enjoyed enormous success on the local bowling lanes

Their efforts have certainly garnered the attention of the York County Bowling Proprietors Association, which has named Baer its Male Bowler of Decade and Whipple Miller and Sparks as its Female Co-Bowlers of the Decade.

"Excelling over a long period of time is one of the marks of a great bowler," said Dave Zegler, president of the proprietors' association. "These three bowlers have certainly done that, and we are proud to recognize them for their efforts."

The Bowler of the Decade awards were presented at the York-Adams United States Bowling Congress Hall of Fame dinner on Saturday.

For first time ever, father and son to enter York-Adams bowling hall of fame in same year

In addition to his four titles, Baer also finished second on two occasions, third once and fourth once.

Baer achieved the rare distinction of 100 perfect games in the fall of 2019. He also has registered more than 75 800 series.

On the female side, the proprietors couldn't separate Whipple Miller and Sparks.

"It's the first time we have had co-winners," said Zelger. "But, it's rare to have two bowlers so highly qualified. We thought both bowlers were very deserving of the award.  It would have been a shame not to recognize both of them."

Stephanie Whipple Miller: In 2015, Whipple-Miller became only the second York County woman inducted into the Pennsylvania Women's Hall of Fame for her bowling ability.

She also is one of three county women to average 230 or better. Her 231 average for the 2010-11 season was the highest in the state. The following season, she posted a 232 average, her career high. She led county women in high average six times during the past decade.

She was a member of a three-man, two-woman team that rolled the nation's high team series and high team game in the 2018-19 season.

Over her career, she has tallied 15 perfect games and a dozen 800 series, including a high of 835.

Jen Sparks: When the decade started, Sparks was an outstanding junior bowler.

She captured five Pennsylvania Junior Bowlers Tournaments in the 2009-2010 season and added eight more titles in 2010-2011. She was named PJBT Bowler of the Year in back-to-back seasons.

Sparks has finished among the top five averages for York County women since 2011-12. She has led the county for four of the past five years.

In 2012, Sparks won the Greater Schuykill USBC Open singles title and was a  member of the winning team at the Pennsylvania Women's Tournament. She and her husband, Travis, won the 2019 Pennsylvania Mixed Doubles title.

In 2019, she was a member of York Team Challenge championship squad.

PAST BOWLERS OF THE DECADE