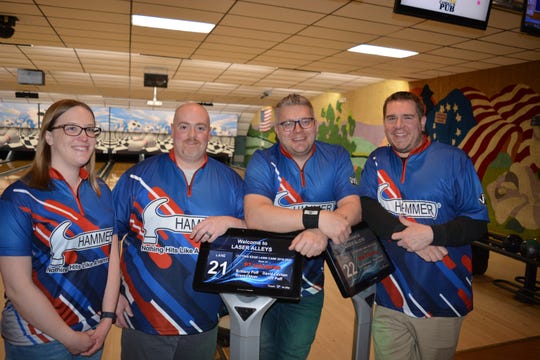 The Pure It Bowling team, from left, Kerry Smith, Dominic Mottillo, Jeff Smith and Kevin Bankrowski, rolled a 3,051 series at Laser Alleys, the highest in the nation this season for a three-man and one-woman team. (Photo: SUBMITTED)

What started out as a night of fun ended up as a record-setting performance.

The Pure It Bowling team of Kerry and Jeff Smith, Kevin Bandrowski and Dominic Mottillo tallied 3,051 pins, which is the highest in the nation this season for a three-man and one-woman team, according to www.bowl.com.

The Laser Alleys foursome eclipsed the previous high of 3,016 rolled by a Canoga, California, quartet.

Although the team fell 13 pins shy of the York County four-man team record set by the Alley Oops squad of Eric Smith, Paul Wolfram, Jacob Hawkins and Tanner Laughman, the Pure It Bowling series is believed to be the county record for a three-man and one-woman team.

"Monday nights are our chance to get out and have fun," said Jeff Smith, who owns a pro shop and an eight-lane center in Ephrata. "We are all competitive bowlers, but fun is definitely our focus. We want to relax and enjoy a night out."

Kerry Smith led the Lancaster County squad with a 789 series, while Bandrowski added a 773. Mottillo tallied a 759 and Jeff Smith chipped in with a 730.

Bandrowski said striking was infectious, but spare shooting was the key at the Springettsbury Township facility on East Market Street.

"We had a clean series," he said. "That means all four bowlers had a strike or a spare in every frame for three games.

"We had 120 frames of marks," he added. "That's incredible. It's very hard to do, and it made a big difference in our series total."

Entering the third game, the foursome had no idea what the York County record was for a four-man team or a three-man and one-woman team.

"We didn't realize how well we were doing because we were just having fun," Mottillo said. "We were just trying to avoid an open frame."

This season marks the first time the team has bowled in the Monday league at Laser Alleys.

"We heard the Monday night league at Laser Alleys was a good league and we put together a team on the spur of the moment. We are enjoying the league," Jeff Smith said.

All four bowlers have different styles and play different lines.

"Although we have different styles, we communicate well with each other," Kerry Smith said. "We talk about how the lanes are changing and what type of ball is best for the conditions."

The Pure It Bowling team is hoping its 3,051 total holds up as the highest in the nation this season.

Is there a chance that the team could eclipse its total?

"Anything's possible," Jeff Smith said. "If it happens, it happens. But we aren't going to put too much pressure on ourselves."

After all, fun is their focus.