The Colony Park North No. 3 team won one for 'Pap' during the Mike Elicker Memorial Team Challenge at South Hanover Lanes. 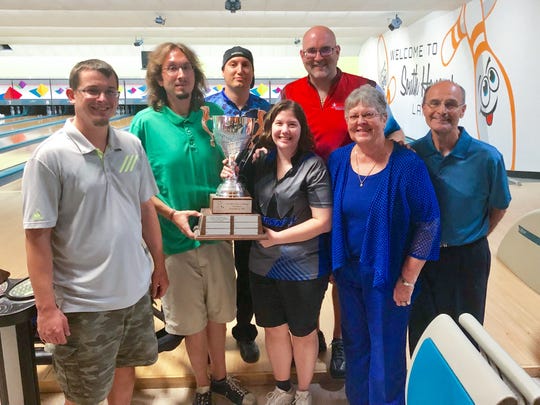 Colony Park North No. 3 defeated the Suburban Bowlerama No. 1 team of Jimmy Plessinger, Dave Kareis, Kevin Appnel, Eric Smith and Paul Wolfram, 225-216 and 201-197, in the finals to secure the cup.

"This is the most emotional win of my life," said Jen Sparks, who slammed the door on Suburban's comeback hopes in the second game with a strong 10th frame from her anchor position. "We definitely wanted to win the tournament for 'Pap.' We felt he was with us all day."

"It was a very special win," said grandson Greg Elicker. "I just thought about how happy this would make 'Pap.'"

"Mike would be so proud of Jen and Greg and the rest of the team," said Judy Elicker, his widow.

Rallying for the win: Colony Park North No. 3 had to rally to win the tournament. The team was fifth after three games of league-style qualifying. The fivesome caught fire in games three through seven of the 12-game Baker format. They reeled off games of 224, 248, 248, 225 and 234 to move into third-place.

"Colony Park North No. 3 was great in the clutch in the finals and the semifinals," said Don Smith, the tournament director. "It was a fitting and emotional win for them. There were a lot of misty eyes during the trophy presentation."

Jen Sparks said: "I felt like a great weight had been lifted off my shoulders when we won. Our entire team wanted to win this tournament and make sure the traveling trophy returned to Colony Park North. We all worked together, and it was a great team effort."

Reach Barry Sparks at sports@yorkdispatch.com. This story was provided through the York Area Bowling Proprietors Association.