The West York boys' tennis team is tied for first in York-Adams Division II. The last time the Bulldogs won a boys' tennis title was 1967. 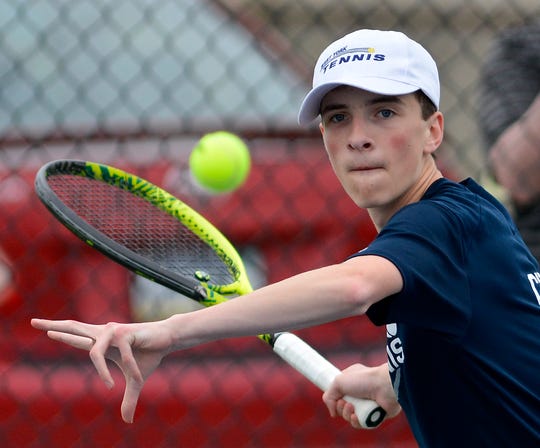 West York's Augie Citrone focuses on the ball while playing Josh Lynn of Hanover in the number one seed match, Monday, April 8, 2019. John A. Pavoncello photo (Photo: The York Dispatch)

The first is the potential for the first team championship since 1967. The Bulldogs are 6-0 in York-Adams Division II play and are a win over Gettysburg on Wednesday from at least a share of the championship.

"Being that it’s been 52 years, we want it," said Augie Citrone, the team’s No. 1 singles player, after the Bulldogs' 5-0 home win over Hanover on Monday. “We want to win it, and we want it bad.”

The second motivation is, if the Bulldogs clinch the title, head coach Pete Kerns promised his players they can dump the water cooler on him.

"They're looking forward to that," Kerns said with a laugh. "I'm not."

If it means winning the Division II title, though, Kerns said he can deal with the cold water.

"It means everything to the team,” he said. “We’ve been talking about this since last year. We want to put our year on the banner in the gym.” 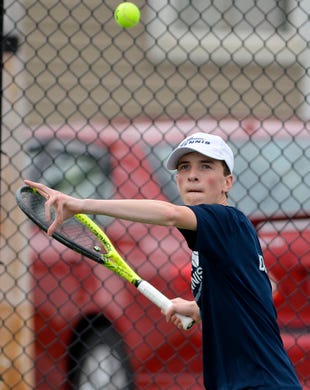 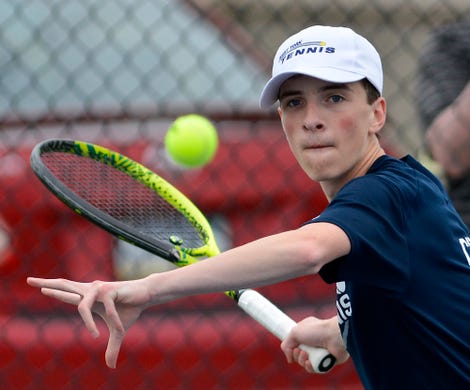 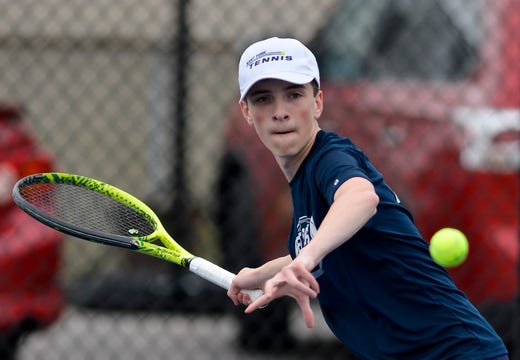 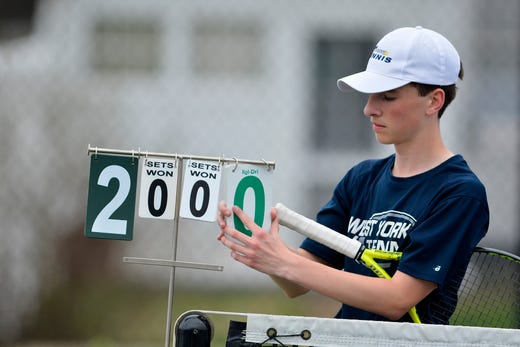 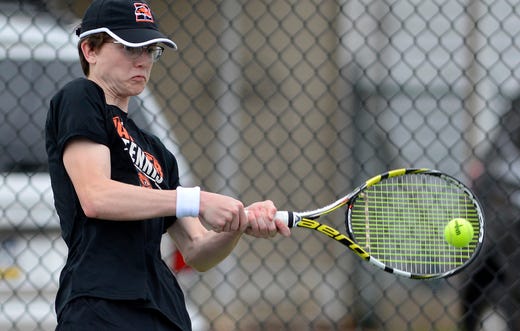 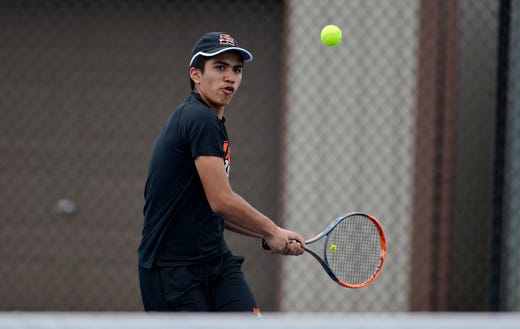 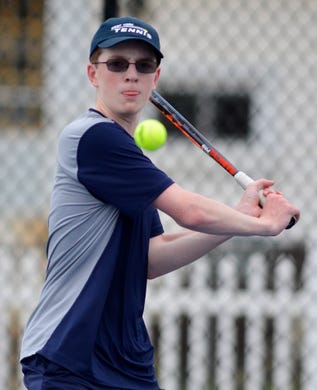 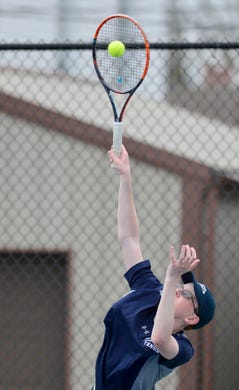 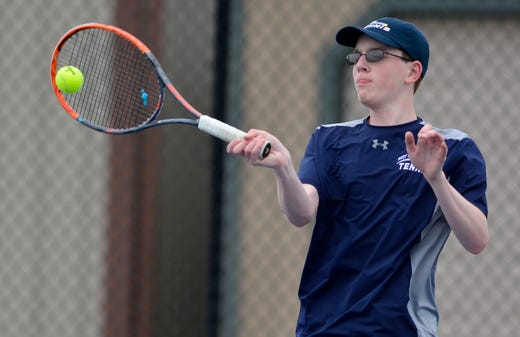 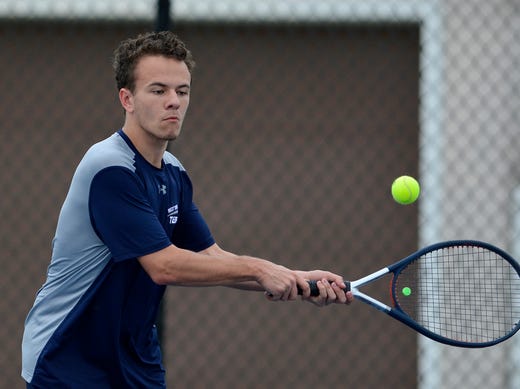 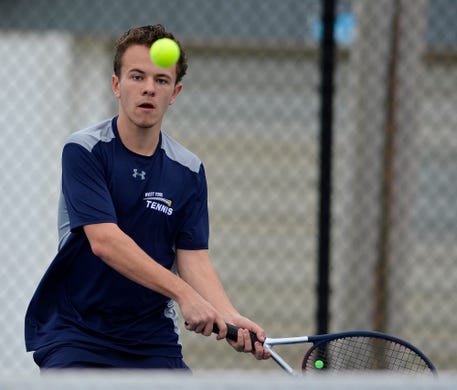 Renewed success: Despite their success this season, the Bulldogs are not traditionally one of the top boys' tennis programs in the league. In fact, they've been one of the worst in the last 15 years.

Last year, however, the Bulldogs made improvements to finish third in D-II play with a 5-3 division record. Their 9-7 overall mark was their first season above .500 since 2004.

"Coming into last season, we knew we had a lot better of a team than the year before,” Citrone said. “We improved last year as a team.”

Improving from last year: The Bulldogs are 8-1 overall so far this season, with their lone loss being a 3-2 defeat to York Suburban, a Division I team.

While the Bulldogs' singles players are crucial to the team's success, Kerns said his doubles players — Jake Altimore, Brendan Guy, Matt Fuentes and Griffin Conaway — are why the team has taken the next step. Altimore/Guy won 6-1, 6-1 in No. 1 doubles on Monday vs. Hanover, while Fuentes/Conaway won 6-0, 6-0.

"The doubles are the ones that are the difference makers,” Kerns said. “They’re really clicking this year. That’s what hurt us last year."

Citrone, who has an 8-1 record this season, said the difference in this year's team is dedication.

"Last season, we sometimes lapsed mentally as a team,” Citrone said. “We didn’t always have 100 percent intensity. That’s not a problem this year. Everyone wants to win it. We want to get that title.”

Citrone's development: While tennis, in high school, is a team game, it's crucial to have a top No. 1 player, such as Citrone. 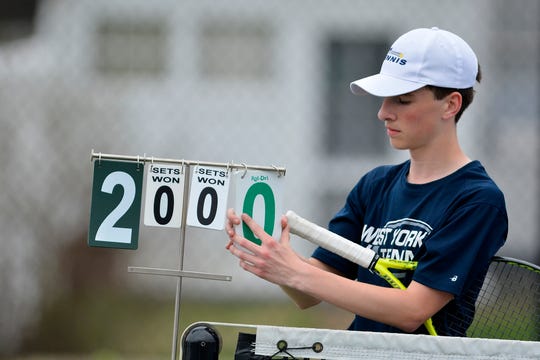 However, according to Kerns, Citrone, a junior, wasn't always eager to be the team's No. 1 player.

"His freshman year he was a little laid back,” Kerns said. “He didn’t want to jump into No. 1 right away. Last year, he took over and his game was pretty good. This year, his game has really improved."

Citrone, who started playing tennis at age 10 with his twin brother, Jack, said his biggest development since he was a freshman is his mental approach.

"I’ve physically developed, obviously; I’ve gotten taller and stronger,” Augie Citrone said. “But mentally, when I was a freshman and sophomore, I would get rattled. This year, I don’t let the points bleed. If I have a bad shot or lose a point, I am erasing it from my memory and moving on.” 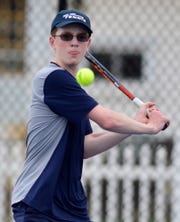 Other Bulldogs: Jack Citrone is West York's No. 2 singles player, and he's undefeated this season.

"He’s tennis smart," said Kerns, who is in his 10th season at the helm. "He places the ball and gets his opponents moving.”

Senior No. 3 singles player Jacob Landis is 7-1 this season and uses his athleticism as a cross-country runner to take advantage of opponents.

The Citrone twins and Landis all won 6-1, 6-1 against Hanover Monday.

Gaining talent from the pitch: Of the Bulldogs' doubles players, area fans may recognize Altimore, who is in his first season on the tennis team, more as a soccer player. The junior midfielder was chosen as the Y-A D-II Player of the Year by the coaches this past season.

“We convinced him to play tennis this year,” Augie Citrone said. “He came out and got in it right away. He’s an example of, if you get an athlete, they jump in right away. He’s really picked up the game quickly."

"Gettysburg is going to be a big match, especially considering they’re (Class) 3-A playing in Division II,” Augie Citrone said. “We know we have to go through them to win it. We’ve been preparing for it all year long.”