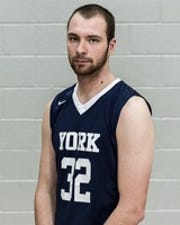 The local Lions knocked off four-time defending United States Collegiate Athletic Association Division II Tournament champion Berkeley in the quarterfinals. No. 9 seed PSY led for most of the second half to hold off the No. 1 seed in Uniontown, 69-67. The local Lions are two wins away from a D-II junior college title.

The victory is revenge from the 2017 USCAA title game, in which Berkeley defeated PSY 80-68. The local Lions were the No. 6 seed that season and defeated the No. 2 and No. 3 seeds to reach the championship game.

The last two wins have come in the first round and the quarterfinals, respectively, in the USCAA D-II Tournament.

All five wins have been close games, with the average margin of victory at 3.2 points. PSY defeated Brandywine by four points, Mont Alto by eight, Wilkes-Barre by one in overtime, Central Penn by one and Berkeley by two.

Penn State York advanced to the semifinals with the victory. Tip for the local Lions' game against No. 5 Johnson & Wales is 7 p.m.