Team Pennsylvania that competed in the Brogden Cup in Tampa, Florida, is shown above. SUBMITTED.(Photo: Photo courtesy of Frank Corto)

The Americans battled the Canadians in a three-game series called the Brogden Cup.

Despite going 0-3 vs. Canada in Tampa, Florida, Frank Corto, the team’s head coach and the head coach of Team Lacrosse of Central Pennsylvania, said the tournament was a good experience for the 23 players.

“It was great,” Frank Corto said. “It was a unique experience for me and the kids to represent the United States.”

“The first two games were close and competitive,” Frank Corto said. “They were more physical and in better shape. Our kids wore down because of the heat. We got down early in the first game, but the kids never quit. In that third game we were down 8-1 and we got it back to 8-5 and lost 10-5.”

“Their entire team was about two years older than our team,” Frank Corto said. “Age was a small piece of the puzzle, but they were awesome. They had kids going to Johns Hopkins, Cornell and any good school you can think of.”

Dominic Corto led the team on offense, posting four goals and four assists. Vaught, a freshman at Community College of Baltimore County Essex, added a goal and won 60 percent of his face-offs. 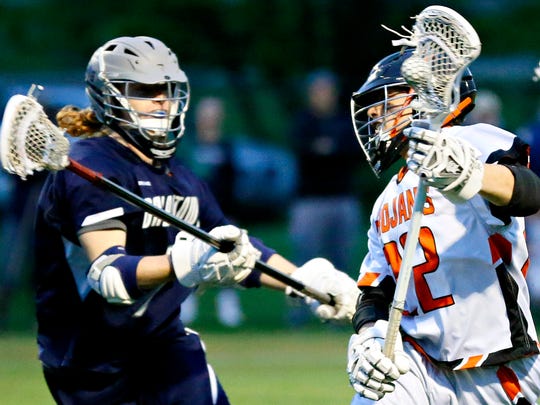 Canadians play tough: Frank Corto said the Brogden Cup will help the players improve because of the physical style the Canadians played with.

“Right from the first minute, the Canadians punch you in the mouth,” he said. “’They play as tough and as rough as I’ve seen kids play lacrosse. They play a meaner, tougher game, and I think that’s because they also play hockey. … Kollin told me was that he was glad to do this before the college season, because he learned so much when it comes to how tough they were.”

Most of the players and their families flew down to Tampa on Dec. 26, and the team practiced the following day at Tampa University. That night, the team held a reception together for the players and parents.

“We had a great night,” Frank Corto said. “It was really cool. Every player and all the parents showed up. It was awesome to get excited for the tournament.”

Kollin Vaught, right, works on his face-off technique with his brother, Brady, during a Central York practice last season. Vaught was part of the American team in the Brogden Cup in Tampa, Florida. FILE PHOTO (Photo: Elijah Armold ---York Dispatch)

The first two games of the tournament were played on Dec. 28, with the final match on Dec. 29. With 23 players on the roster, Corto said he made it a priority in the final game to get everyone playing time.

"I had a couple of kids who didn’t play as much the first two games, because we were trying to win, but we made sure those kids played a lot more in the third game,” he said. “We didn’t want people to come down to Florida and spend a couple of thousand dollars and not have your kid play.”

Frank Corto, who has coached some of the players for nearly 10 years, said the trip was “special.”

“I’ve coached some of those kids since they were in third grade, and now they’re all finishing high school,” he said. “For me to coach them one more time, on top of wearing a USA jersey, made it extra special. It was nice to have that one last (experience) with them.”