Hershey's Christian Pulisic became the most expensive American soccer player in history after completing a transfer to English club Chelsea. 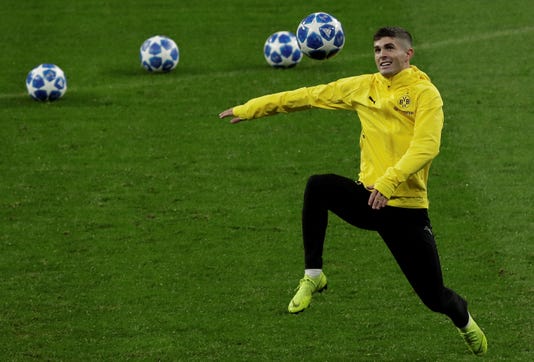 FILE - In this Nov. 5, 2018 file photo Borussia Dortmund's Christian Politic goes for a ball during a training session at Wanda Metropolitano stadium in Madrid, Spain, prior to the Champions League match between Atletico and Dortmund. Borussia Dortmund said in a statement on Wednesday, Jan. 2, 2019 that Chelsea found an agreement with Pulisic but he will remain on loan in Dortmund until the end of the season. (AP Photo/Manu Fernandez, file)(Photo: Manu Fernandez, AP)

DORTMUND, Germany — Christian Pulisic became the most expensive American soccer player in history after completing a transfer to English club Chelsea from Borussia Dortmund on Wednesday.

Chelsea paid 64 million euros ($73 million) for the 20-year-old United States winger, who will be loaned back to Dortmund for the rest of this season. The German club won't have to pay Chelsea for the loan.

The fee is easily the biggest paid for an American player, surpassing the reported 20 million euros ($22.5 million) spent by German team Wolfsburg for John Brooks in 2017.

"It was always Christian's big dream to play in the Premier League," Dortmund sporting director Michael Zorc said. "That certainly has to do with his American origins, and so it wasn't possible for us to extend his contract."

The Hershey, Pennsylvania-native's contract with Dortmund was due to expire at the end of next season.

"It is a privilege to have signed for such a legendary club," Pulisic said of the London team that has won five Premier League titles since 2005. He thanked Dortmund for "finding a solution that was win-win for everyone."

He may help establish U.S. fan base: Pulisic had long been linked with a move to a Premier League club, while Dortmund's league rival Bayern Munich was also reportedly interested.

Despite the price tag, the signing could be somewhat of a coup for Chelsea if it helps the club establish a larger American fan base.

"He's one of the great young talents in the world," former U.S. defender Alexi Lalas wrote on Twitter. "He just happens to be American...which makes him even more valuable. All brands want to continue to mine the fertile U.S. market, having Pulisic doesn't hurt."

It is the most high-profile move secured by an American outfield player, with goalkeepers Tim Howard having previously played for Manchester United and Brad Friedel for Liverpool.

Chelsea director Marina Granovskaia said the club has signed "one of Europe's most sought-after young players."

"At just 20, we believe he has the potential to become an important Chelsea player for many years to come," she said.

Overshadowed at Dortmund: Pulisic, who can play on either wing or behind the striker, has been overshadowed somewhat at Dortmund this season due to the emergence of English youngster Jadon Sancho. Sancho was signed from Manchester City for 8 million pounds ($10 million) in the offseason of 2017 and has already scored six Bundesliga goals and set up nine more this season.

Pulisic has made only 11 league appearances (one goal, two assists) and only five of those were as a starter.

In a message posted on his Twitter account, Pulisic urged Dortmund fans to "not doubt my passion, determination and my 110 percent commitment to the team right until the last ball is kicked this season."

Dortmund leads the German league by six points heading into the second half of the season and is through to the last 16 of the Champions League, where it will face Tottenham.

Chelsea is fourth in the Premier League, 11 points behind first-place Liverpool after 20 games.