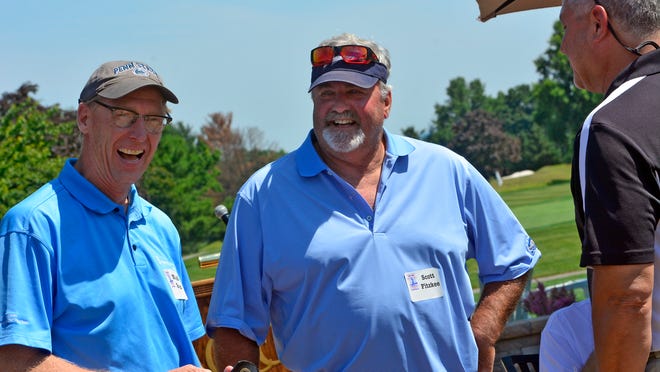 Penn State men's basketball assistant coach Keith Urgo has a daughter who was born with Down Syndrome.

He also has a god-daughter born with the same challenge.

So, any chance he can get, he likes to help out and support charity events that benefit the Special Olympics. On Monday, he and fellow PSU assistant coach Ross Condon were at Out Door Country Club representing the Nittany Lions' men's basketball team for the Eddie Khayat-George Tarasovic Celebrity Golf Classic.

"This is one of the best events that I've ever been a part of," Urgo said. "It's obviously an incredible cause. Me, personally, I had a baby girl born with Down Syndrome last August. My third child. So, needless to say, it hits home to me and my family. I have another god-daughter who was born with Down Syndrome 2 1/2 years ago, so the Special Olympics is near and dear to my heart and my family, so I'm privileged and honored to be a part of something like this."

Lions on the move: While the event hit close to home for Urgo, it was also a chance for him to promote the Penn State men's basketball team that is, at least on paper, on the way up.

After spending many years in the bottom half of the Big Ten standings, the Nittany Lions finally have a recruiting class coming in this fall that has fans excited. Their 2016 recruiting class ranks in the top 25 nationally on most major recruiting websites, and Urgo, as an assistant, had a lot to do with that.

Among head coach Patrick Chambers' best recruiting class is a trio of standouts from Roman Catholic High School in Philadelphia: Nazeer Bostick, Lamar Stevens and Tony Carr. Both Carr and Stevens are four-star recruits, according to 24/7 Sports, while Bostick is a three-star recruit. Also part of the star-studded class is Joe Hampton, a three-star recruit from the Virginia prep school powerhouse, Oak Hill Academy.

All four players are representative of ties that Chambers, Urgo and the rest of the Nittany Lion coaching staff have to those areas — parts of the country that the coaching staff pushed hard to tap.

Chambers, who was listed as one of the celebrities expected to attend, couldn't make it because of a last-minute scheduling conflict.

Regardless, it was still a good chance for Urgo and Condon to get out into York County and get the Penn State fans from the area excited about what should be a promising future for the program.

New name, same event: Even though the event is in its 28th year, this time around, it had a new name.

Khayat and Tarasovic are the founders of the annual golf event in York County, and so this was the first year that the tournament committee honored them and put their names on it.

Unfortunately, because of health reasons, neither Tarasovic or Khayat could attend the golf outing.

Khayat spent nine years in the NFL, winning the 1960 NFL title as a member of the Philadelphia Eagles. He also later served as head coach for the Eagles as part of a three-decade stint as a coach.

Tarasovic enjoyed a 15-year NFL career, playing for both the Pittsburgh Steelers and Philadelphia.

In the previous 27 years that the charity outing has taken place, it's raised $630,000, all of which has stayed within York County to support the Special Olympics.

Other celebrities: Even though the two guys the event was named after couldn't make it, there were several other prominent celebrities in attendance, both of current and past glory.

Scott Fitzkee, a Red Lion and Penn State grad, was in attendance, as well as Susquehannock grads Duke and Randy Edsall. Duke, serves as an official for many major NCAA Division I basketball games, while Randy is currently working for the Detroit Lions as director of football research and special projects. Randy Edsall declined an interview.

One current NFL player in attendance was Darius Jennings, a second-year wide receiver for the Cleveland Browns. Jennings grew up in Baltimore and attended the University of Virginia. He was asked to attend the event by former NFL safety Tony Covington, spending one of his last few days of down time to help the York County Special Olympics before getting set for mini-camp to open for the upcoming season.

"We've been in Cleveland for the past 2 1/2 months working on timing," Jennings said. "But, I'm excited to get the ball rolling."

Tournament winners: The team of Stan White, Brandon Knaub, Matt DeRose, Steve Merrick and Shawn Stine had the low score on the day with a 55.

Hendrickson is a former major league pitcher and NBA player who lives in York. Bunting is a former Philadelphia Eagles linebacker.