We haven't reached the halfway mark of the regular season just yet, but the York-Adams League football picture is... 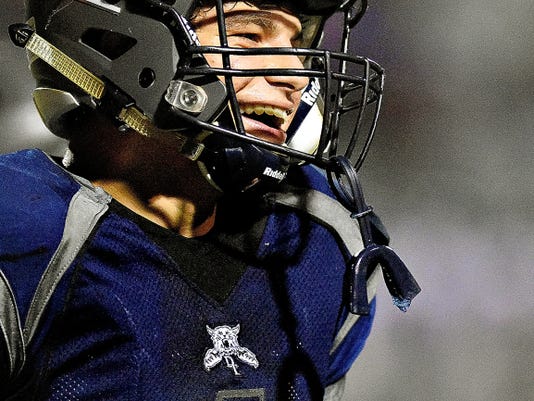 We haven't reached the halfway mark of the regular season just yet, but the York-Adams League football picture is becoming a little less cloudy.

The division championships haven't been determined. Far from it. After all, we're just one week into the league season.

Here's a breakdown of how the division races are shaping up with six games left in the regular season.

Division I: Right now this looks like a four-team slugfest among preseason-favorite South Western, defending champion Dallastown, Red Lion and Northeastern. Each is 1-0 in division action.

Dallastown and Northeastern each stand at 4-0 overall, while Red Lion and South Western come in at 3-1.

The Wildcats have ridden a stingy defense, which is allowing a league-best six points per game, despite returning just three starters from a year ago. Head Coach Kevin Myers has simply found a way to reload, rather than rebuild.

South Western, with a bevy of returning starters back, was the trendy pick before the season began, and for the most part, has played that way.

The only blemish on South Western's record was a 42-14 loss to a high-scoring and undefeated Cedar Cliff bunch.

Northeastern may be the biggest surprise among the D-I contenders, coming off a 2-5 division mark a season ago. But the Bobcats firmly established themselves as a team to reckon with by dismantling traditional power Central York 42-0 on Friday night.

Red Lion, meanwhile, could easily be 4-0. The Lions' only loss was a narrow 22-15 setback to Manheim Township. In their three wins, Red Lion is outscoring its foes by an average of 48.3-13.3. The high-octane Lions lead the league in scoring at 40 points per game.

The division race should start to sort itself out this Friday, when Red Lion visits Manchester to take on Northeastern in an early-season showdown.

Division II: In recent years, this was the easiest division race to predict. It usually started and ended with West York. The Bulldogs have either won or shared seven of the last eight D-II crowns.

This year, however, the division race looks much more competitive.

None of the D-II teams experienced much success in non-league action. In fact, only Dover, York Suburban and Eastern York are at .500 overall, with each sporting 2-2 records. The other four teams (West York, Susquehannock, Kennard-Dale and Gettysburg) are each 1-3.

West York, Dover and Suburban each won their division openers and those three teams will likely be the teams at the top of the standings when the season ends.

Dover, under first-year head coach Wayne Snelbaker, may have been the most impressive D-II team thus far. The Eagles, with a two-point swing against Big Spring, would be 3-1.

Suburban, meanwhile, has been competitive in every game. The Trojans' only losses came by seven points to unbeaten Northeastern and by 10 points to Red Land.

Division III: Right now, the two top teams in this division appear to be upstart Hanover and preseason-favorite Biglerville.

The division's three traditional powers, Bermudian Springs, Delone Catholic and Littlestown, appear to be in rebuilding modes. Defending champion Bermudian is 0-4, while Delone and Littlestown each sit at 1-3. Last year's D-II runner-up, York Catholic, is also 1-3.

Granted, the Nighthawks have not exactly faced a daunting schedule. The combined record of their four foes is 3-13. But Hanover has met every challenge thus far and appear to be gaining momentum as the season progresses.

Biglerville, meanwhile, is just six points away from also being 4-0, suffering a three-point setback vs. Annville-Cleona and a one-point defeat vs. Waynesboro. Both A-C and Waynesboro are 3-1.

You may want to circle Friday, Oct. 30. That's the date when the Nighthawks visit the Canners in a game that may decide the D-III crown.

Conjecture: Of course, this is all just conjecture. The 2015 season has already been packed with surprises. Who would have predicted that Hanover and Northeastern would each be 4-0, while Bermudian Springs would be 0-4 and Central York, West York, Delone and Littlestown would each be 1-3?

Some more stunners are almost certainly in store over the next six weeks of the regular season. Each division in the league looks more competitive and more wide open than in many moons.

It should be a blast to watch.