Injuries keep piling up for Eagles on defense

Injuries keep piling up for Eagles on defense 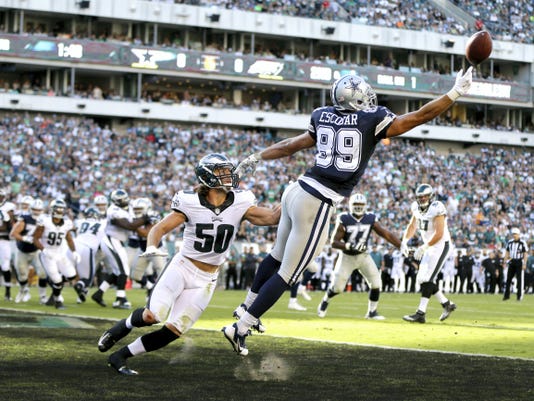 Dallas' Gavin Escobar (89) cannot reach a pass in the end zone as Philadelphia's Kiko Alonso (50) looks on during the first half on Sunday in Philadelphia. Alonzo won't play this coming Sunday vs. the New York Jets because he hurt his surgically repaired knee.(Photo: MATT ROURKE &#45;&#45; The Associated Press)

PHILADELPHIA — Now injuries are piling up for the Philadelphia Eagles.

"We've got depth and we're very confident with who we have in there," defensive coordinator Billy Davis said Tuesday.

Alonso hurt his surgically repaired left knee and Thornton broke a bone in his right hand in a 20-10 loss to Dallas. Kendricks, who injured a hamstring, has an "outside chance" to play, according to Davis.

Alonso missed the 2014 season with Buffalo after tearing his left ACL. There's concern he may have reinjured the ligament.

"He's still in the evaluation process, so we are crossing our fingers and hoping everything turns out for the best," Davis said.

Veteran DeMeco Ryans and rookie Jordan Hicks would start for Alonso and Kendricks. Ryans is the team's defensive leader, but has been slowed in his return from surgery on his Achilles tendon. He made two tackles on a goal-line stand against Dallas.

"DeMeco, we are bringing him back on a little bit of a pitch count because of the injury he's coming back from," Davis said. "But DeMeco Ryans is DeMeco. We have nothing but confidence in DeMeco."

"Hicks is a very mature rookie," Davis said. "He went out there and it was not too big for him."

The Eagles signed linebacker Najee Goode, who was the team's final cut in the preseason, to add depth. Goode played here the past two seasons and started a game in 2013.

They also get back second-year linebacker Marcus Smith, a first-round pick who played little last season. He returns from a hamstring injury that forced him to miss most of the preseason. Smith was a healthy inactive against the Cowboys.

Thornton, who wore a semi-cast on his hand, could return in two weeks. He's played every game since 2012 and started 35 in a row. Brandon Bair and Taylor Hart will rotate in his place.

"Taylor is great at the technique that we play with shock and shed and the way he gets his hands on people and then disengages and gets to the ball," Davis said. "Taylor is going to be a good football player for us."