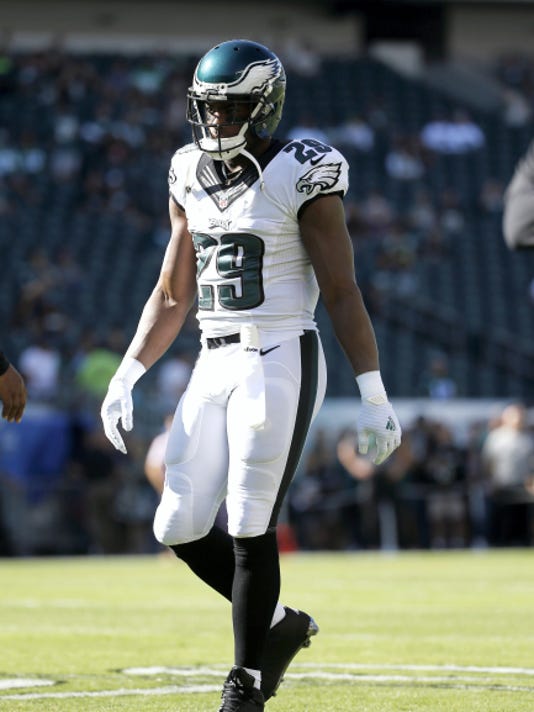 PHILADELPHIA — Chip Kelly's offense looked better with all the players he didn't want.

Sam Bradford, DeMarco Murray and Co. were dismal in Sunday's 20-10 loss to Dallas that dropped the Philadelphia Eagles to 0-2.

"I was embarrassed," Kelly said Monday. "That's not the way we're supposed to play football."

The Cowboys held Philadelphia to 21 yards total offense in the first half and didn't allow a touchdown until the game was out of reach in the final minutes. The biggest problem was the offensive line. Murray had nowhere to run and finished with 2 yards on 13 carries.

It's easy to question those moves now. But the decision to release two-time Pro Bowl left guard Evan Mathis because of a contract dispute, and longtime starting right guard Todd Herremans for salary-cap purposes, are the ones haunting Kelly.

Allen Barbre, who replaced Mathis, and Andrew Gardner, who replaced Herremans, each had eight career starts before this season. They've struggled along with their veteran linemates.

The Eagles had arguably the best offensive line in the NFL in Kelly's first season in 2013. Jason Peters, Mathis, Jason Kelce, Herremans and Lane Johnson started every game and paved the way for McCoy to set a franchise-record for yards rushing. The Eagles went 10-6 and won the NFC East.

The unit didn't start one game together last season because of injuries, but the offense still averaged 124.5 yards rushing per game. They have just 70 yards in two games this season.

"It doesn't matter who the running back is, we are not doing anything up front to give him an opportunity," Kelce said. "We have got to get this fixed up front. We have to get it better."

Making playoffs will be tough: The Eagles had Super Bowl aspirations after a 3-1 preseason in which Bradford looked sharp by leading the offense to four touchdowns on four series in the two games he played. But defenses didn't game plan for Philadelphia's up-tempo offense in those games.

The Eagles are 0-2 for first time since 2007, when they finished 8-8. They opened the 2003 season with home losses to Tampa Bay and New England, but went 12-2 the rest of the way and lost the NFC title game to the Panthers.

"We're overthinking things instead of going out and playing fundamental football," Kelly said.

Next up for Philadelphia is a game at the New York Jets. Then Jets will be coming off a short week following Monday night's game at Indianapolis.

Notes: The Eagles signed Thad Lewis to be the No. 3 quarterback and released Stephen Morris. Lewis is 2-4 as a starter in six seasons. He's on his sixth team. ... Kelly had no update on injured LBs Kiko Alonso (knee) and Mychal Kendricks (hamstring).