Everett George arrived at Santander Stadium at 8 Wednesday morning. Staring him in the face was a 16-hour work day... 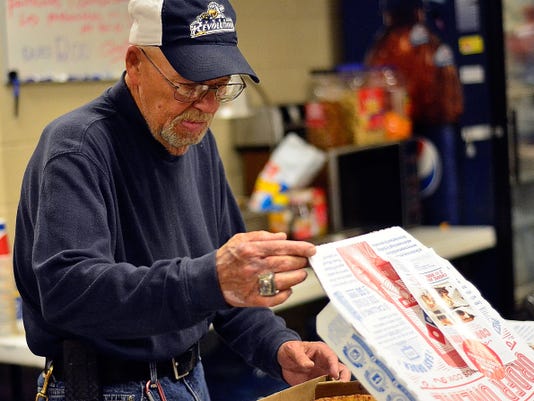 Staring him in the face was a 16-hour work day that was nothing compared to his previous night's work. Just three hours before starting his work for that Wednesday, he was finishing up Tuesday's tasks, which kept him at the stadium until 5 Wednesday morning. Typically George's days end an hour or two after midnight, but he was pushed into overtime waiting for the Long Island Ducks to finish their celebration after making the Atlantic League playoffs.

Such is the work of being the visiting clubhouse attendant.

There won't be many nights like that left for George. In fact, only three. That's how many dates are remaining in York's regular season, and in George's career as a clubhouse attendant for the Revolution. Once the final dish is cleaned following Sunday's game, George will walk out of the visitor's clubhouse one final time. He's said every year over the past couple that it would be his last, but he continued to come back. That's not the case this year.

A baseball lifer: Baseball has always been a part of George's life, all the way back to his days as a child growing up outside of Pittsburgh. When he moved to York in 1967 to work for York Ice Machine, which eventually became York International, George made sure that he kept up with his favorite sport. He was a fan of the York Pirates for the two years he lived in York County before the team folded in 1969.

Over the next quarter of a century, George continued following his beloved Pirates from across the state, while working for York International. But, two strokes in a short period of time in the mid-1990s forced him to leave his job there and get into television, where he worked for York Community Access. It was that experience that eventually landed him with his first gig with the Revolution when the team was founded in 2007.

His experience in TV got him a job with the team videotaping pitchers and hitters over the first couple years. He would attend the games with his first wife, Lois, until she suffered a fatal stroke following the 2009 season. Members of the Revolution staff attended her funeral and when George returned to work for the team in 2010, he shifted into a new role as the Revs' clubhouse attendant. George stayed in that position for the next two seasons, eventually developing a close relationship with many of the players. They treated him like he was one of them, pulling pranks on him and not shying away from the friendly banter that goes on inside a baseball clubhouse on a daily basis.

But, at the beginning of 2012, George ventured to the other side of Santander Stadium and began working as the visiting clubhouse attendant.

Daily routine: The daily routine of a clubhouse attendant isn't glamorous. When George arrives to the park at 8 a.m. — sometimes he'll spend the night there — the first duty he tackles for the day is finishing up anything that didn't get completed from the previous game. After that, he goes shopping for food, drinks and anything else the players will need for the day. That usually takes him up to about noon, when he begins preparing the pre-game meal for the players. He'll do laundry after pre-game workouts and then begin preparing the post-game meal while the game is going on. While the players are eating their meal, he's doing laundry, and once that is done and the players are done eating, it's on to the dishes. Lastly, after that task is complete, he gets each player's locker set up for the next day's game.

George isn't on his own. He has help from longtime friend and fellow clubhouse attendant Art Jackson, who helps George get through, not only his senior moments, but each day.

"It's always fun at night when he has a loop in his hands and walks around the sofa at least once and asks: 'Where's this locker at?' And it's a coach's loop," Jackson said.

"I'm here late because of my senior moments," George said. "It's hard to remember where I put everybody, so I look to him to help because he's like a horse. He's got a memory like a horse, so that helps me."

Developing friendships: He's had the privilege of seeing some notable players come through his clubhouse, such as Roger Clemens and Dontrelle Willis. Even as players come and go, George said it's the relationships that he's built with visiting players that have kept him in that clubhouse for the past four years. George is now 73, so he's not a guy who generally likes to text. But, he will, when other players text him to say hello and see how he's doing.

"The camaraderie with the players," he said. "You get to meet a lot of people and make some friends."

For reasons he can't explain, he said that saying goodbye to the Sugar Land Skeeters players for the final time back in mid-July was the hardest. But, every time he's had to say his final farewells to teams this season, it's been emotional.

His favorite moment during his run with York was in 2010 and 2011 when the team won back-to-back Atlantic League championships. He wears his championship ring with pride, not afraid to show it off.

Life's next chapter: George is ready for the next phase of his life, which will include traveling with his second wife, Sharon. They're planning a trip to South Carolina to view some of the historical sites and then moving out to Arizona for the winter. But, they'll always return to York come baseball season.

On this night, Wednesday night, the Revs were officially eliminated from playoff contention. That meant George's final day of his working life is on Sunday, when he'll lock the doors to the clubhouse for the final time.

"You put your whole life into it," he said faintly. "When I lock the door on Sunday ... that will be a sad time for me because I know I'm not coming back."

Sunday night he'll say goodbye to the Somerset Patriots for the last time. Wednesday night, he bid farewell to Long Island. But, it wasn't drawn out because it was a travel day. George fed the players their pizza and got them on their way. When he finally finished up his duties for the night, he locked the clubhouse door and went home.

It was already Thursday.