TORONTO - Another game against the Blue Jays, another forgettable outing for Baltimore's Chris Tillman. 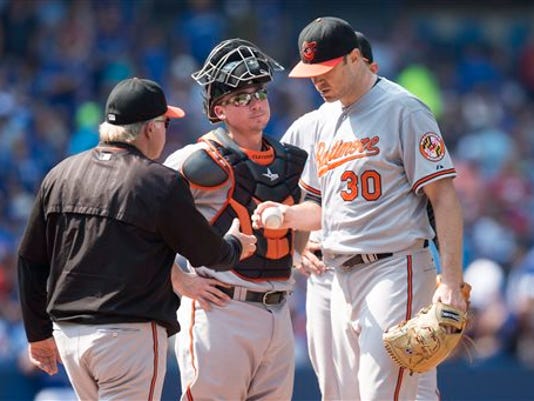 TORONTO - Another game against the Blue Jays, another forgettable outing for Baltimore's Chris Tillman.

Baltimore lost for the 14th time in 17 games.

Tillman is 0-4 with a 15.50 ERA in five starts against Toronto this season and has given up nine home runs. He has fared even worse in three starts north of the border, allowing 19 runs. His ERA at Rogers Centre this season is 19.73.

"It's not something they're doing as much as where Chris is getting the ball," Orioles manager Buck Showalter said. "He's trying to go down and away and the ball leaks middle in and you're going to pay that price every time."

" It's a tough lineup," Tillman said. "It's a lineup where you have to execute consistently. I'd make two or three good pitches in a row and then I'd make a mistake and they'd make me pay."

The first four batters got hits off Tillman. Ben Revere singled and scored on Donaldson's double to left. Bautista homered for the second straight day, his 33rd, and Edwin Encarnacion followed with a single.

Tulowitzki connected in the third for his fifth homer since joining Toronto. Pillar chased Tillman with a leadoff drive in the fourth, becoming the seventh Blue Jays batter to reach double-digit homers.

"I just feel like guys are comfortable off him," Pillar said of Tillman. "We've seen him a lot in the past, we know what he has and guys have a good approach against him."

Toronto improved to 78-58, becoming the first team since the 2004 Astros to reach 20 games above .500 after having a losing record following the All Star break. Toronto was 50-51 following a loss to Phi ladelphia on July 28, the day after the Blue Jays acquired Tulowitzki from Colorado. Two days later, Toronto added left-hander David Price in a deal with Detroit.

"We've been playing great," manager John Gibbons said. "The winning all started after (GM Alex Anthopoulos) made those trades."

The Blue Jays added three more in the sixth against Chaz Roe. Donaldson hit a sacrifice fly before Bautista and Encarnacion each hit RBI doubles.

Baltimore's Ryan Flaherty hit a two-run homer in the fifth, and Jimmy Paredes had an RBI double off LaTroy Hawkins in the sixth. Nolan Reimold hit a solo homer off Roberto Osuna in the ninth.

The Orioles claimed INF Andy Wilkins off waivers from the Los Angeles Dodgers. To make room on the roster, LHP Cesar Cabral was designated for assignment.

Orioles: C Matt Wieters (left wrist) missed his second straight game. Wieters injured his wrist on a dive while backing up a play at first base on Friday. He felt well enough to hold a bat Sunday and hopes to return Monday at New York.

Orioles: LHP Wei-Yin Chen (8-7, 3.36 ERA) starts the opener of a three-game series at the New York Yankees on Monday afternoon. Chen has won four of his past five decisions. RH P Michael Pineda (10-8, 4.07 ERA) starts for the Yankees.

Blue Jays: LHP Mark Buehrle (14-6, 3.53 ERA) will be pitching on seven days' rest when he faces the Red Sox at Fenway Park on Monday afternoon. Buehrle was pushed back twice after complaining of fatigue following his previous start. RHP Rick Porcello 6-12, 5.21 ERA) starts for Boston.