Orioles' Wright draws some positives despite loss to Blue Jays

TORONTO — Orioles pitcher Mike Wright welcomed a demotion to the minors after being battered by the Toronto...

Orioles' Wright draws some positives despite loss to Blue Jays 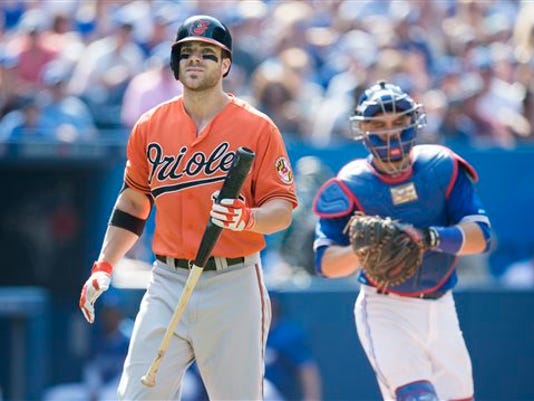 TORONTO — Orioles pitcher Mike Wright welcomed a demotion to the minors after being battered by the Toronto Blue Jays in June.

With his confidence restored, he returned to face them again Saturday. Even though he didn't win, Wright managed to draw some positives from his performance.

After being replaced in that game, Wright took out some frustration by repeatedly pounding the dugout bench with his fist.

"I had zero confidence going into that game," Wright said of his abbreviated start in June. "I was actually glad I got send down and I could kind of recover and be a little more mentally prepared."

"I thought he was better than the last time here," Orioles manager Buck Showalter said. "He's pitched some good games for us. I love the way he attacked the strike zone."

Wright had runners on in each of his four innings, but was able to limit the damage each time.

"I found myself in a lot of tough situations but I felt like a did a good job of minimizing it," he said.

Showalter said it was "a good test" for Wright to face the high-scoring Blue Jays again.

"Mike is going to help us," Showalter said. "I like the way he got out there and competed."

Toronto pushed its division lead back to 1 1-2 games after Tampa Bay beat the Yankees 3-2.

The Blue Jays bounced back from a 10-2 loss to Baltimore on Friday night. Toronto hasn't dropped two in a row since Aug. 14-15 against the Yankees.

"We know we don't need to score 10 runs to win a game," Bautista said. "It's a lot easier when you have that trust in whoever is on the mound that they're going to do a pretty good job and give you a chance to win."

"He was great," manager John Gibbons said. "At the end of the day, that's why he's here."

Bautista hit a solo home run in the first and made it 2-0 with an RBI double in the third.

The slumping Orioles lost for the 13th time in 16 games.

Baltimore slugger Chris Davis, who had hit five home runs in his previous three games, went 1 for 3 with a walk and struck out twice.

The Orioles have scored three runs or fewer in each of their past 13 defeats.

Baltimore is expected to add OF Nolan Reimold to its roster before Sunday's game. Reimold was in the clubhouse following the game, having travelled to Toronto from Triple-A Norfolk.

Orioles: C Matt Wieters was not available after jamming his left wrist covering first base Friday. X-rays were negative and Wieters hopes to return Sunday. ... SS J.J. Hardy (left groin) took batting practice before the game and remains on track to be activated off the DL before Tuesday's game at New York against the Yankees.

Blue Jays: RHP Marco Estrada (11-8, 3.16 ERA) will move up a day to pitch in place of LHP Mark Buehrle, who's being pushed back to Monday afternoon's game at Fenway Park in Boston. Buehrle will get six days of rest after complaining of fatigue following his most recent start. Estrada will be on regular rest because of Thursday's day off.