DOVER — Rest assured, Dover senior Brooke Firestone hasn't been around forever. It only seems that way,... 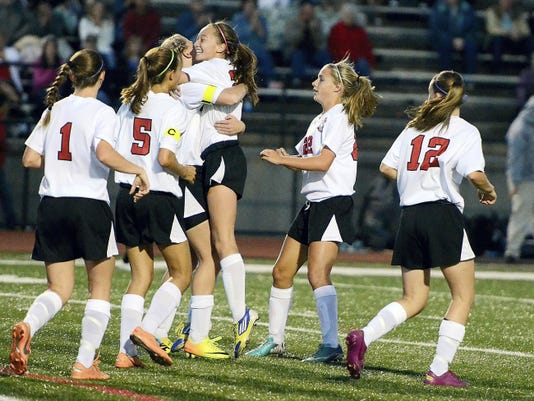 Dover celebrates a goal by Brooke Firestone, center, last year against Northeastern. Firestone returns for her senior season after scoring 23 goals as a junior and earning all-state honors.(Photo: JOHN A&#46; PAVONCELLO &#45;&#45; jpavoncello&#64;yorkdispatch&#46;com)

It only seems that way, especially to the other teams in York-Adams Division II.

Alas, this will be Firestone's final season in the red and white for the Eagles and their coach, Bret Altimore.

Firestone, who has played for the varsity squad since her freshman season, has every intention of going out in grand fashion.

Stepping into a leadership role, Firestone points the way both vocally and by example. When Altimore was away from a recent practice attending to other matters, it was Firestone, with some help from teammates Payton and Maddy Miller, who took it upon herself to make sure practice ran smoothly.

"The three captains (both Millers and Cierra Malehorn) and I work to get everybody's intensity up from the beginning of practice so we get the most out of what we can from it," Firestone said.

Leadership is a quality that has slowly been building for Firestone, who was named to the Pennsylvania Soccer Coaches Association All-State Team after leading her team with 23 goals as a junior. As a veteran on the club, Firestone has been privileged to play with older players, who have helped instill those qualities in her.

"They taught me so much," she said. "They taught everybody how to be leaders. Like Max (Maxine Herman) and Brooke (May) were also amazing players. I've learned so much from them."

While having a talent such as Firestone on the field is a huge asset for Altimore, the Dover coach, who led the team to back-to-back York-Adams League titles in 2012 and 2013, is more impressed with the character of his team.

"They have character," Altimore said. "They're awesome young women. And they have mental toughness. They understand what it is to be part of a family and how, sometimes quite frankly, that can be a little dysfunctional. And the expectations are high. But they know the responsibility that comes along with signing on the dotted line that there are certain things that they are responsible for. And, ultimately, it's putting the team ahead of yourself."

With that said, could this year's squad match, or even surpass, the one that made it into the PIAA Class AAA Tournament for the first time in school history two years ago? Altimore sounded as if he wanted to curtail any thoughts like that, especially given that the season won't get started until next week.

"Sure," Altimore said. "I wouldn't keep anything off the table. But we're just not going to look too far ahead. We're just going to focus on getting better every day. Did we do the things today that will get us to be better? That's what we focus on."

Division I: Last year's showdowns between heavyweights Central York (11-1 in 2014) and Dallastown (11-1) figure to occur again this season. The Panthers and Wildcats split their regular-season contests last year before Central prevailed in the York-Adams League title tilt. Central lost a few standouts to graduation but returns a solid core of seniors, headlined by Division I Player of the Year Kennedy Little, a midfielder. She is joined by fellow all-stars Bri Hackos and Faith Hatchard. Dallastown will have the one-two duo of Sierra Austin and Paige Hartman back in the fold. Austin, a defender, and Hartman, a forward, were both selected as all-stars by the league coaches a season ago. Northeastern (8-4) and South Western (5-7) shouldn't be overlooked. Both clubs figure to be very competitive as well, with both squads returning outstanding goalies.

Division II: Susquehannock (11-1) was the team that snapped Dover's 32-game unbeaten streak in divisional play a season ago. The Warriors, who shared the division title with Dover (11-1), welcome back Emily Landis, who was named an all-star last year. While the Warriors figure to be Dover's main rival in the division, Altimore stressed that teams such as York Suburban (8-4), Gettysburg (4-8) and West York (2-10) could all prove capable of beating any team on any given night.

Division III: York Catholic (12-0) dominated the division a season ago before falling in the District 3-A playoffs. Just four players, including standout goalie Hannah Laslo, graduated from that squad, meaning the vast majority of players are back for the new head coach, Joe Nattans. That list included last year's Player of the Year, Elizabeth Johnson, who scored 36 goals as a junior. Fairfield (10-2) should remain the Fighting Irish's main rival in the division. The Green Knights return the sibling duo of Hannah and Moriah Logue. Hannah Logue led the team in goals with 37 a year ago.