In your editorial “Time’s up for corporate welfare,” you turned the serious debate about energy policy in Pennsylvania into a rambling diatribe about populist politics, Stockholm Syndrome and Foxconn in Wisconsin. 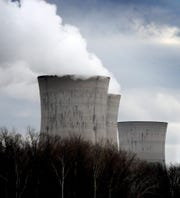 In your editorial “Time’s up for corporate welfare,” you turned the serious debate about energy policy in Pennsylvania into a rambling diatribe about populist politics, Stockholm Syndrome and Foxconn in Wisconsin. I have to expect that most of your readers were as confused as I was when I read it.

The issue isn’t about the corporations that make power. It’s about people. It’s about the families who will be forced to leave Pennsylvania if nuclear plants close. It’s about our children’s future and whether the air they breathe is clean or dirty. Do we want a future that has cleaner air and a more reliable and diverse power grid? Or do we want dirtier air and a grid that is more and more dependent on carbon-emitting gas?

More: LETTER: Nothing has changed in nuclear power industry

Pennsylvania is already the third-largest carbon-emitter in the United States. Nuclear power in Pennsylvania provides 93 percent of our state’s zero-emitting electricity. If we lose our nuclear plants, emissions will only increase, as will the harmful effects on people. According to an MIT report, 52,000 Americans die prematurely each year from the burning of fossil fuels to make electricity. In its 2018 Report Card on air quality, The American Lung Association gave York County an “F” for air quality — the worst in the state. I would think these are important issues to you and your readers.

You also make no mention of the cost of allowing our nuclear plants to close. Proposed legislation in Harrisburg (HB11) clearly shows that fixing Pennsylvania’s broken energy policy to fairly value nuclear power’s zero-emission electricity will save Pennsylvania’s electricity customers $788 million annually. Without the legislation, a Met-Ed residential customer in York County will pay $2.39 more per month compared to only $1.77 a month with the legislation.

Today, Pennsylvania’s five nuclear power plants produce 42 percent of our state’s electricity.  Now is the time to have a serious discussion about how we can decrease air pollution, decrease cost to customers and retain tens of thousands of good-paying jobs in the commonwealth. Let’s focus on what really matters.