EDITORIAL: Crucial to have more data on victims

But, throughout the crisis, Gov. Tom Wolf's administration has said its hands are tied by a 65-year-old law drafted amid a sweeping outbreak of syphilis.

EDITORIAL: Crucial to have more data on victims 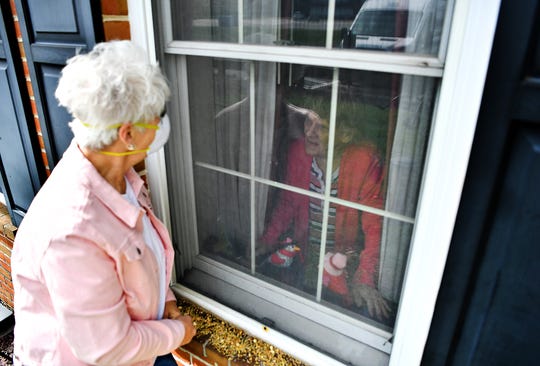 Donna Bortner, 68, left, of Springettsbury Township, visits her mother Janet Seitz, 89, at ManorCare Health Services-Kingston Court, Thursday, April 3, 2020. Bortner regularly visits her mother who has lived at the home since March 2019 following an illness. Seitz also suffers from dementia. "She’s just so easy to please because she’s just so grateful that we come and see her," said Bortner. Dawn J. Sagert photo (Photo: The York Dispatch)

Just the basics: precise age, sex, race and city of residence. Pennsylvanians deserve that much.

Chicago Mayor Lori Lightfoot this week went on the attack after Illinois' data showed black neighborhoods have been disproportionately pummeled by the coronavirus. Blacks account for about 68% of Chicago's coronavirus-related deaths in Lightfoot's city, while comprising just 30% of the total population, reported the Chicago Tribune.

Officials in Louisiana, Michigan and New York state are vocally fretting about the infection's higher-than-average spread among poor minority communities, where health care is too often out of reach and pre-existing conditions exacerbate an already dangerous infection.

These troubling facts are only known, though, because officials in those states are collecting and releasing the information allowing local governments to drill down and identify neighborhood-level hot spots — vital and necessary information that the public deserves.

In Pennsylvania, however, almost no such information has been made public. Every day, state health officials release the daily update, which includes the total number of new infections and deaths, all broken out by county.

The information gives little clue as to whether on municipality is especially hard hit. It says little about the sex or race of the deceased, and offers only an age range for those infected. It intentionally leaves the local officials and the public in the dark.

And that fact has raised the ire of at least some local officials.

"While in a perfect world the answer of ‘treat everyone as if they tested positive for COVID-19’ would be appropriate, it is not a perfect world and there is not enough (personal protective equipment) to adequately protect our first responders," Yates wrote. “They need this information.”

But, throughout the crisis, Gov. Tom Wolf's administration has said its hands are tied by a 65-year-old law drafted amid a sweeping outbreak of syphilis.

The state's Disease Control and Prevention Act limits the release of information to that which is "necessary to protect the health" of Pennsylvania residents, said state Health Department spokeswoman Maggi Mumma.

And yet, the Wolf administration has spent weeks arguing that the most basic demographic information — readily accessible throughout the country — doesn't meet that threshold.

It's been a laughable interpretation — or it would be if the situation wasn't so dire.

Just this week, Wolf's administration appeared to relent a bit, indicating it would attempt to compile racial data. But officials gave no indication of when it would be made public, citing issues with collecting the information.

People deserve to know if they live in a community where the coronavirus is spreading. People should know if the day's deaths were those most vulnerable, such as the elderly, or if someone seemingly more resistant to the virus died, too. And they should know if the racial disparities seen elsewhere are present here.

Such information would better inform local governments, which are trying to respond without the information they need. And it would arm the public with the details necessary to, at the very least, judge the efficacy of the state's response.

Wolf rightly shutdown the state, and his actions have likely saved lives already. But he's also shown a lack of basic transparency. His administration has refused to release its list of businesses that received exemptions to his shutdown order, even as lawmakers accused it of political patronage. Now, officials within Wolf's administration rebuff even the most reasonable requests for basic details about the disease.

And they hang it on an old law that was never designed for a crisis such as this one.

It's odd that a governor who, for more than a month, has claimed expansive executive authority can be hamstrung so easily.