Health experts warn a return to anything like normal in the nation’s businesses, schools, stores, sports stadiums and, given the Easter deadline, churches, would be catastrophic.

VIDEO: Coronavirus symptoms and who is at risk York Dispatch

In Pennsylvania, in the United States, and in many parts of the world, the global coronavirus pandemic is still accelerating.

The U.S. had about 125,000 infections and 2,200 deaths on Sunday — up from about 32,000 a week earlier. And this is in spite of the inexcusably slow rate of testing. Pennsylvania has more than 33,000 confirmed cases of COVID-19, the illness caused by the novel coronavirus — 38 of those cases fatal.

So, it is no surprise that medical experts like Director of the National Institute of Allergy and Infectious Diseases Dr. Anthony Fauci, a member of the White House’s coronavirus response team, are urging a continuation of social-distancing and shelter-in-place practices that are in effect in large swaths of the country, including York County. 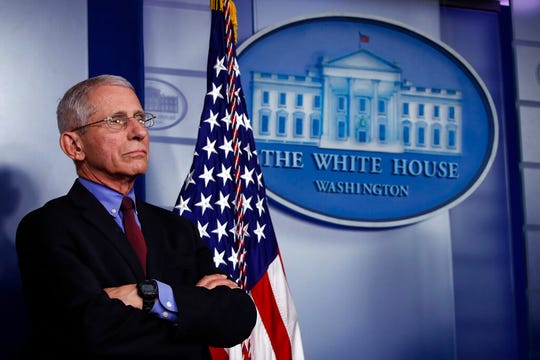 What is surprising is the view of noted medical non-expert President Donald Trump, who would like to see a return to business as usual by Easter.

That’s less than two weeks away.

It’s also dangerous. As he has throughout the development and explosion of this global pandemic, Trump continues to downplay the seriousness of the threat, the depth of the spread, the challenges in developing a vaccine and the likely duration of the crisis.

And as he has throughout, the president continues to worry more about the health of financial markets than American citizens. In making his case in a news conference and on Fox News, Trump maintains the nation “wasn’t built to be closed,” and that its economy must return to some semblance of normalcy.

“We cannot let the cure be worse than the problem itself,” is fast becoming the mantra of Trump, rattled business leaders and like-minded office-holders like Texas Lt. Gov. Dan Patrick, who went so far as to suggest older Americans, who are at elevated risk of death from the virus, be willing to sacrifice their lives for the supposed greater good of a stable economy.

“No one reached out to me and said, as a senior citizen, are you willing to take a chance on your survival in exchange for keeping the America that all America loves for your children and grandchildren?” he told Fox News. “And if that’s the exchange, I’m all in.”

There’s probably a bad joke to be made about Patrick leading by example, but instead we’ll ask, is this what politics has come to? Sacrificing grandma to satisfy jittery money managers and CEOs? Or worse, to own the libs?

Health experts warn a return to anything like normal in the nation’s businesses, schools, stores, sports stadiums and, given the Easter deadline, churches, would be catastrophic. Even some in Trump’s own party acknowledge this reality.

“There will be no normally functioning economy if our hospitals are overwhelmed and thousands of Americans of all ages, including our doctors and nurses, lay dying because we have failed to do what’s necessary to stop the virus,” Wyoming Rep. Liz Cheney, the No. 3 House Republican, declared on Twitter Tuesday.

That’s the point. Aside from spiking the rate of new infections and related mortality, a foolhardy rush toward illusory pre-virus normalcy would do little to shore up financial markets, reverse skyrocketing unemployment figures or bolster retailers’ coffers.

The public cannot — and should not — operate as normal until things actually are back to normal (or at least a whole lot closer to normal than they are now).

And no amount of magical thinking by the president can change that.