EDITORIAL: Pennsylvania deserves a say in the nominee

The way things are set up now, Pennsylvania's delegates are just an afterthought. The contest is practically over more than a month before we even have a chance to vote.

EDITORIAL: Pennsylvania deserves a say in the nominee 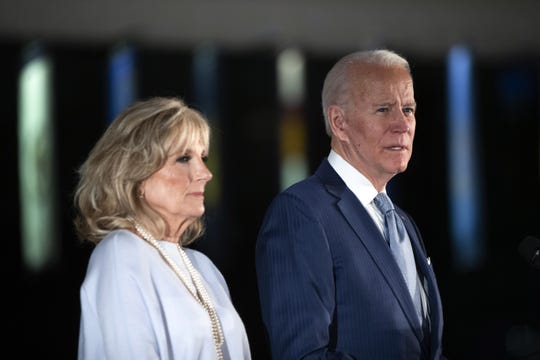 Pennsylvania will send 210 delegates to the Democratic National Convention in July, 186 pledged delegates and 24 superdelegates.

For a candidate who needs 1,991 delegates to become a nominee, you'd think the state would be a big contest. After all, if one state can get you more than 10% of the way to the nomination, that seems like a pretty large prize.

But the way things are set up now, Pennsylvania's delegates are just an afterthought. The contest is practically over more than a month before we even have a chance to vote.

More: How important will the Pa. primary be? Potentially not very

Pennsylvania's primary is April 28. The presidential primary is held earlier than primaries in nonpresidential years, but it's still six weeks after Super Tuesday and late enough that candidates are nearly always already assured of the nomination.

As it stands, former Vice President Joe Biden has taken a strong lead in the Democratic race to see who will go up against President Donald Trump in November. The race has come down to Biden and Vermont Sen. Bernie Sanders, with Biden leading with 864 pledged delegates to Sanders' 710.

Tuesday, four states — Arizona, Florida, Illinois and Ohio — will hold primaries to decide who will get a total of 577 delegates.

Neither Biden nor Sanders will receive all of those delegates because they are portioned out by voting percentages. But if Biden continues to win states, the gap will soon become impossible for Sanders to overcome.

Even with the race down to these two men, it will be difficult for one of them to walk into the convention with enough delegates to win, simply because of the proportional system. But the math is such that Biden will likely have an insurmountable lead before the end of March.

And that means Pennsylvania's primary will hold very little meaning.

“It’s difficult to know with certainty whether our state still matters,” said G. Terry Madonna, director of the Center for Politics and Public Affairs at Franklin & Marshall College. "Right now, our primary could be what we call a confirming event to confirm Biden's nomination."

As recently as this year, there have been discussions in the state Legislature about moving future presidential primaries in Pennsylvania to an earlier date in an effort to boost the state's national influence.

The state Senate in January unanimously passed a bill drafted by Sen. John Gordner, R-Columbia, that would move the state's primary up to the third Tuesday of March, beginning in 2024.

But the bill stalled in the House State Government Committee, where committee chairman Rep. Garth Everett, R-Lycoming, said that the delay is because members have expressed concerns that a March primary would negatively impact campaigns.

For example, if the law had gone into effect in 2020, potential candidates would have had to circulate nominating petitions over the Christmas and New Year's holidays because Pennsylvania has a narrow window for gathering signatures on those petitions.

The thing is, other states have overcome those types of problems. Iowa, New Hampshire, South Carolina, all the Super Tuesday states, they have all looked at the system and made sure that their voters were relevant to the important process of choosing a nominee for president.

There's no reason why Pennsylvania, with 12.8 million residents, the fifth most populous state in the country and always an important battleground state in the presidential race, should have to stand by and watch while so many other states have an earlier say in who the major parties choose to be their standard bearer.

The Legislature needs to make this change happen for 2024.