Kimberley and Tom Kretzmer are putting the former Kralltown Elementary School to good use.

Thumbs up: Kimberley and Tom Kretzmer are putting the former Kralltown Elementary School to good use.

The couple bought the school, which closed in 2011, for $180,000 from the Dover Area School District and plan to make it home to their family, which now includes seven children, most of whom have medical conditions requiring specialized medical care.

Kralltown Elementary will be the third school in which Kimberley and Tom Kretzmer have lived in the past 10 years.

The couple adopt children with terminal or complex medical needs, and a school gives them the space and flexibility to care for them.

The family's first school, Duffield Elementary in Franklin County, was three stories with the kitchen downstairs — not ideal for watching children. 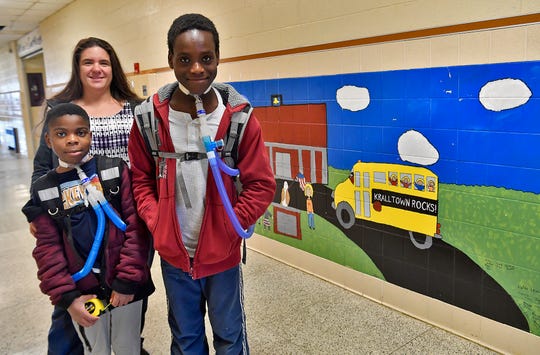 Kimberly Kretzmer and two of her children seven children, Elijah, 10 and Oliver, 13, at the former Kralltown Elementary School that will soon be their home. Wednesday, February 19, 2020. John A. Pavoncello photo (Photo: The York Dispatch)

"It was very inconvenient because we can’t have the kids out of sight," she said. "So to go down to cook was next to impossible."

The single-level Kralltown sits on 9 acres in a quiet Washington Township community at 21 Creek Road. There's even a playground in the backyard.

Kimberley and Tom and with seven of their children — one of them biological — live with four dogs and a 24-hour rotating nursing staff. Two adult children live away from home.

Most of their children require special care, such as ventilators for breathing and feeding tubes. Some have intellectual disabilities, liver disease and kidney failure.

Though it will soon become a home, Kralltown will retain elements of its history — including a mural depicting greetings from children of different nationalities, which the family plans to keep.

But they also plan to do some renovations, including putting in handicap-accessible bathrooms, laundry rooms, an adapted kitchen, air conditioning, an indoor playground/therapy room (from the Make-a-Wish Foundation), a generator, partial fencing of the property and an in-ground pool.

They plan to move into the school within the next couple of months.

Thumbs up: In the male-dominated field of PIAA basketball officials, Jenny Horvatinovic and Sami Herman stand out. They’re among just half a dozen female high school girls’ basketball referees – and they’re hoping to see their ranks grow.

Horvatinovic was a McDonald’s All-American nominee as a player at Dallastown and then Red Lion during her high school days. She helped the Lions to the 2012 District 3 4-A title before moving on to college, where she played for two years at Monmouth and two years at the University of Tampa.

Herman is a former player at Spring Grove, where she spent two seasons before giving up the sport to pursue dancing. During her college days at the University of Pittsburgh, Herman was part of the Panthers dance team that performed during men’s and women’s basketball contests.

“I know that when I was a player, I didn’t think of becoming an official ever,” Horvatinovic said. “I looked around at all the officials for my games in high school and none of them looked like me, so it didn’t even seem like an option.”

While the York Chapter of PIAA basketball officials for high school girls’ basketball is dominated by men, both Horvatinovic and Herman had nothing but good things to say about their peers.

“It really feels like they are my basketball family,” Herman said.

Both women agreed that the reason they and the others in the organization are doing what they do boils down to one thing.

“As a basketball official I really feel like I’m helping our youth out,” Herman said. “So doing this is a way of giving back.”

For those who also want to give back, but maybe don’t have the time to commit to coaching, getting involved as an official is something Horvatinovic and Herman encourage.

“The first thing that people say to me is that they would never do this,” Horvatinovic said. “Because they don’t want people yelling at them, but it’s not really as intimidating as people think it is. You have partners out on the court with you and you help each other out.”

“I know that (the York Chapter) is always looking for more officials,” Herman added. “If someone asks I just tell them that it’s a lot of fun and that we have a great camaraderie as a group.