EDITORIAL: 'You ain’t seen nothin’ yet' from Trump

The president’s parade of personal-favor pardons this week is just the latest of his norm-defying, authoritarian and politically provocative post-impeachment moves.

EDITORIAL: 'You ain’t seen nothin’ yet' from Trump 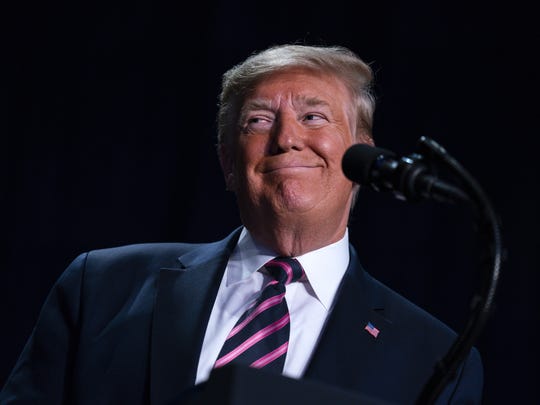 On the eve of the 1984 presidential election, popular Republican incumbent Ronald Reagan told the nation during a televised address, “America’s best days lie ahead, and you ain’t seen nothin’ yet.”

In the wake of his Republican-furnished, witness-free, bum-rush acquittal this month, President Trump has demonstrated a similar sentiment.

Not the part about America’s best days lying ahead; the nation’s least ethical, most self-serving and endlessly corrupt president put a stake through the heart of that argument years ago. By deed, however, the president has in essence told the nation, you ain’t seen nothing yet.

In fact, ever since Pennsylvania’s Pat Toomey and his Republican partymates in the Senate acquitted Trump for abuse of power, he’s done little else but abuse his power.

The president’s parade of personal-favor pardons this week is just the latest of his norm-defying, authoritarian and politically provocative post-impeachment moves.

And among the most noxious.

None went through the traditional Justice Department review and vetting process. All had some connection to the White House or its media outlet, Fox News. Blagojevich’s wife, Patti, for instance, campaigned repeatedly on the network for her husband’s release.

And having seen their crimes expunged by presidential fiat, they’re echoing the defiant lack of contrition the president himself expressed following his Senate acquittal. “This was persecution masquerading as prosecution,” crowed self-avowed “Trumpocrat” Blagojevich — who had the temerity to call himself a “freed political prisoner.” Please.

The pardons, commutations and clemencies are just once facet of what is beginning to look like a campaign of authoritarianism:

Amid the rampant abuses, it’s easy to forget that the post-impeachment president also called a formal White House gathering to “celebrate” his acquittal (and demean Democratic lawmakers and those who testified at the House hearings), has referred to himself as a king, has been accused in court papers of offering to pardon imprisoned WikiLeaks founder Julian Assange in exchange for Assange saying Russia had nothing to do with hacked Democratic party emails.

It all adds up to a frightening display of tyrannical tendencies and we have Senate Republicans (with the admirable exception of Mitt Romney) to thank for it.

More frightening still: the distinct possibility that we ain’t see nothin’ yet.