If you thought the Equal Rights Amendment was dead and gone, well, one could hardly blame you. Congress passed the measure in 1972 and the majority of states that ratified it — including, we’re proud to note, Pennsylvania — acted within the next two years. 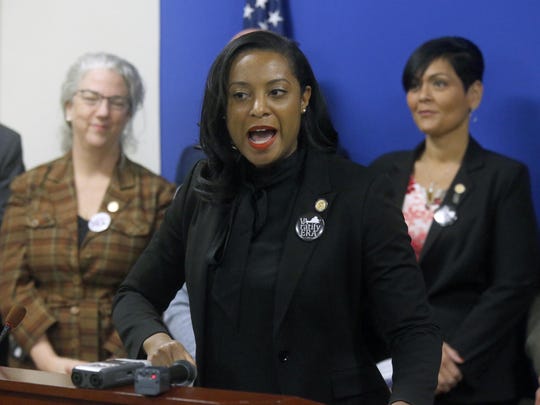 FILE - Jan. 22, 2019 file photo, Del. Jennifer Carroll Foy, D-Prince William, center, speaks during a news conference of ERA (Equal Rights Amendment) supporters after her ERA bill was killed by a House subcommittee inside the Pocahontas Building in Richmond, Va. Supporters of the Equal Rights Amendment are confident Virginia is on the verge of becoming the critical 38th state to ratify the gender equality measure. The proposed 28th amendment to the U.S. Constitution faces a host of likely legal challenges and vehement opposition from conservative activists who depict the ERA as a threat to their stances on abortion and transgender rights. (Bob Brown/Richmond Times-Dispatch via AP) (Photo: BOB BROWN / AP)

Talk about good things coming to those who wait.

Virginia is poised this month, courtesy of its new Democratic statehouse majority, to become the decisive 38th state to approve the Equal Rights Amendment.

If you thought the Equal Rights Amendment was dead and gone, well, one could hardly blame you. Congress passed the measure in 1972 and the majority of states that ratified it — including, we’re proud to note, Pennsylvania — acted within the next two years.

But that majority never made it the constitutionally required three-quarters of the states. And momentum soon fizzled, owing in large part to successful opposition from conservative activist Phyllis Schlafly and her Eagle Forum organization. Indiana became the 35th state to ratify the would-be 28th Amendment in 1977 and there things sat for four decades.

But the ERA, which prohibits discrimination on the basis of sex, has undergone something of a revival during a presidential administration in which the rights and treatment of women (among other minorities) have taken a step backwards.

Nevada ratified the measure in 2017 and Illinois followed a year later, leaving ERA proponents one state short. Virginia is looking to be the decisive vote.

Of course, it’s not as simple as all that.

The original amendment had a deadline of 1979, which was extended by Congress to 1982. Further complicating matters, back in the 1970s, state legislatures in four states — Idaho, Kentucky, Nebraska and Tennessee — reversed course and voted to rescind their states’ ratification. It gets murkier: Kentucky’s then-lieutenant governor, the pioneering Thelma Stovall, who enjoyed asserting her powers as acting governor while the actual governor was out of state, issued an executive order vetoing the state Assembly’s revocation of its ratification. Meanwhile, South Dakota lawmakers adopted a resolution stipulating their state’s ratification would sunset with the original 1979 deadline.

That makes five states where ratification is, at best, disputed, and none of this has been sorted out in the courts. In fact, even Congress’s deadline extension was challenged. Arguments went to the Supreme Court, which wisely bided its time until the 1982 deadline had passed then declared the matter moot.

But it may soon be unmoot.

The House has moved to eliminate the deadline retroactively and similar legislation has been introduced in the Senate.

Not counting on congressional action, ERA supporters are arguing in court that the original deadlines are beside the point.

“(A) lawsuit filed Tuesday in U.S. District Court in Boston argues, in part, that the deadline imposed by Congress was not included in the text of the three-sentence amendment,” reports the Associated Press, “and therefore not constitutionally binding.”

Backers also point to the Constitution’s most recent amendment, the 27th, which bars Congress from voting itself immediate pay raises. It was passed in 1992 — 203 years after it was written by James Madison.

But conservative opponents will be just as active in the courts, fired up by their belief that the ERA would grant broader protections to transgender Americans and women seeking abortions. Alabama, South Dakota and Louisiana have already filed a lawsuit arguing the deadline has long since expired. And there is little reason to believe there may not be further efforts by Republican-led state legislatures to rescind past ratifications.

All of which is unfortunate. The promise of the ERA — “equality of rights under the law shall not be denied or abridged by the United States or by any state on account of sex” — should be neither controversial nor contested.

A majority of federal lawmakers recognized this almost 50 years ago. A majority of statehouses, including Pennsylvania’s, heartily approved. And once Virginia’s state lawmakers cast their ballots, the necessary three-quarters threshold will have been met.

It is too much to ask conservative opponents to cede defeat. But we would ask that the legal system weigh the various arguments expeditiously and with the understanding that women are fully entitled to equal rights and fair treatment under the law.