Clearly, this string of preposterous, unnecessary and dangerous proposals surrounding abortion has stretched beyond ridiculous.

But the reality is far different:

The spate of recent state laws banning abortion once a fetal heartbeat can be detected (usually at about six weeks) is but one example of the latter. The fact that six weeks is nowhere near fetal viability and most women have no idea they’re pregnant at such an early stage has not prevented lawmakers like Georgia’s Republican Gov. Brain Kemp from signing such legislation. 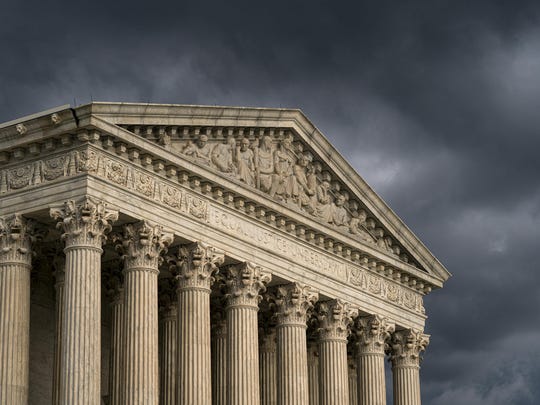 FILE - In this June 20, 2019 file photo, The Supreme Court is seen under stormy skies in Washington. Both sides of the abortion debate are waiting to see if the Supreme Court adds new disputes over state abortion regulations to its election-year docket. The court is expected to announce Friday new cases it will consider in the term that begins next week. (AP Photo/J. Scott Applewhite) (Photo: J. Scott Applewhite / AP)

Indeed, emboldened by the recent addition of two conservative Supreme Court nominees, far-right lawmakers like Kemp are going out of their way to pass laws designed to give the high court an excuse to revisit — and, abortion opponents expect, strike down — Roe v. Wade.

Alabama Republican Gov. Kay Ivey, went even further, signing a law that bans abortion at all stages of pregnancy and doesn’t even provide exceptions for rape or incest. (At least abortion foes have finally done away with the insulting argument that these restrictions were intended for the health and safety of women.)

Pennsylvania has not been immune to this quest by conservative lawmakers to out-do one another when it comes to preposterous, unnecessary and dangerous laws regarding abortion. A pending House bill would require death certificates and burials or cremations for fetal remains — including fertilized eggs that fail to implant in a woman’s uterus.

Of course, in ignoring science, Pennsylvania’s elected officials aren’t alone — or, believe it or not, even at the forefront.

In neighboring Ohio, a contingent of 20 GOP lawmakers has drummed up a measure that would require ectopic pregnancies — in which an embryo implants outside the uterus — to be surgically re-implanted inside the uterus. That’s not only physically impossible, say medical experts, the attempt could be extremely dangerous. (Not to mention: State-mandated surgery to ensure pregnancy has a decidedly “Handmaid’s Tale” vibe to it.)

While they were on such a roll, Ohio’s conservative contingent also proposed new felonies, such as “aggravated abortion murder,” with penalties from lengthy prison sentences to — are you sitting down? — the death penalty.

The death penalty for performing an abortion? How pro-life can you get.

Clearly, this string of preposterous, unnecessary and dangerous proposals surrounding abortion has stretched beyond ridiculous.

And while many of them are obvious attempts to reach the Supreme Court, it is worth noting that should the justices strike down Roe v. Wade, it is the states that will dictate abortion laws individually. These aren’t just test cases, they are proposals that will have very real consequences on very real women.

For that reason among many others, these ludicrous bills, as much anti-women as anti-abortion, should be shouted down by the public and shut down by state lawmakers.